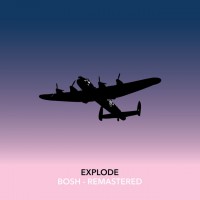 THE FONDLY remembered rock team from Bournemouth, Bosh, who disbanded in 2011, have released a digital compilation of tracks remastered from their albums 'Sound the Alarms', 'The Gloaming Hour', 'Live at the Pier Theatre' and 'Fruit Tree'. The album, 'Explode (Remastered)', is now available on all major download sites. Said Bosh's Dave Griffiths, "Listening back to our releases from our recording heyday, I always felt that the mastering could be improved. We worked with excellent engineers and producers but didn't really know much about mastering. Nearly 10 years on from that time, I thought it would be fun to dig out the unmastered mixes and have a go at polishing the songs up. So I chose the songs that I felt best represented our band and had a lot of nostalgic fun remastering them. We were really prolific in the studio from 2007-2010, and I'm still really proud of the music we made."

For more on Bosh visit the Bosh artist profile