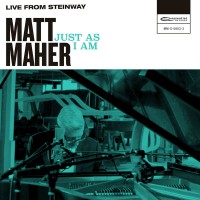 THE INTERNATIONALLY popular worship leader from Tempe, Arizona, Matt Maher, has released the single "Just As I Am". The eight-time Grammy-nominated artist has released a piano only version of the song recorded live at the renowned piano factory of Steinway & Sons in Astoria, New York. "Just As I Am" was originally featured on Maher's sixth studio album, 'Echoes'.