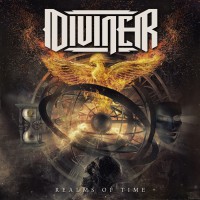 A POWER metal band from Greece, Diviner have released the album 'Realms Of Time' through Ulterium Records. Diviner's debut album 'Fallen Empires' was released in November 2015 and received very good reviews and feedback from around the world. After the release of the album the band played many shows and big festivals in Greece and also in Germany, Netherlands and Switzerland.