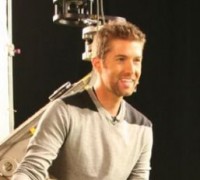 MULTI-PLATINUM selling country singer Josh Turner is set to release the album 'I Serve A Savior' on 26th October. The project includes "hand-picked hymns alongside brand-new originals and live recordings of some of Turner's most memorable hits, including 'Me And God' and 'Long Black Train'." 'I Serve A Savior' contains the song "The River (Of Happiness)", which was written by Josh's wife Jennifer and eldest son Hampton. The pair also sing on the track, along with Turner's three other sons. Said the country star, "It's an uplifting song, and having Jennifer and the boys singing on it drives that home."