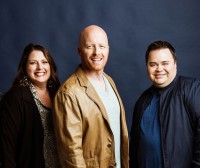 THE AWARD-winning harmony trio Selah have signed with Integrity Music. In their two decade career they've sold more than four million units and received eight Dove Awards. Said the group's Todd Smith, "We are so excited to partner with Integrity Music to create impactful worship music that serves the Church." A new album is slated for release later this year.

For more on Selah visit the Selah artist profile