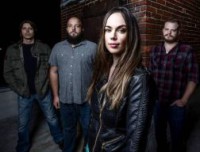 MISSOURI-based band Adelaide, who grew out of a solo project by lead singer Laura Respondek in 2015, have released the independent album 'Strong + Brave'. Read a review on Jesusfreakhideout, "Adelaide's is a sound that fans of hard rock will be well familiar with. Evanescence quickly comes to mind, due to the mix of Respondek's vocals and the gothic-influenced hard rock sound."

For more on Adelaide visit the Adelaide artist profile