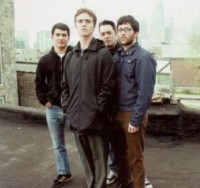 AMERICA's IndieVision Music are working with Chicago-based hardcore punk band The Blamed. The band have posted a new recording of "Live By Truth", originally heard on their 1998 album 'Again' for Grrr Records, which is available as a free download. In November 2018 the band released a split EP which they shared with The Satire.