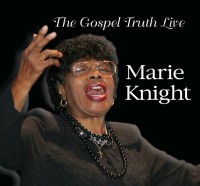 THE LATE gospel singer Marie Knight has been remembered with the release, by New York's MC Records, of a previously unreleased live recording made at the Margaret A Hart '35 Gospel Fest at the Church Street Center in North Adams, Massachusetts. Read a press release, "On October 19, 2007, they all braved the rainy weather to witness one of the last living artists from the Golden Age of Gospel (1940-1960). In this rootsy, organic concert, she breezed through the songbooks of Tharpe - arguably the most influential female gospel act of the 1940s - and also the Rev Gary Davis - who made a huge impact on the 1960s folk movement - and along the way Knight shared brief anecdotes on the highs and lows of her earthly walk, including the fire that killed her two children and her mother. Within the span of 60 minutes, she showcased not only her thunderous contralto but also her commanding personality, sardonic humour and her unabashed evangelism. Singer/pianist Dave Keys, who has played with artists as varied as Chuck Berry and Tanya Tucker, was Knight's sole musician for the get-together. His skilful, buoyant playing kept the spirit high even on ballads."

Thanks for the thoughtful review!