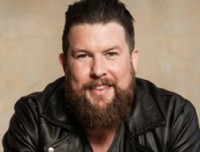 SINGER, songwriter and Provident record artists Zach Williams, who has had Cross Rhythms radio hits like "Slave To Nothing" and "Survivor", is celebrating winning his second Grammy Award. He won it for Best Contemporary Christian Music Performance/Song for "There Was Jesus", a duet with country music superstar Dolly Parton. Williams won his first Grammy in 2018 for his album 'Chain Breaker'.