13th April sees the release of 'Unstoppable' EP by Lily-Jo 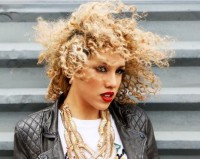 AN EP 'Unstoppable' by Manchester's Lily-Jo, produced and written with Jake Isaac, OL Music, Philippa Hanna and Tom Read, will be released on 13th April. The singer, who has gained major popularity through her touring with LZ7, last year won an award for Best Use Of Digital Media In Youth Work.