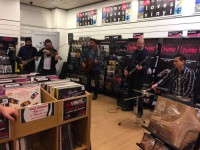 A NEW independent Christian label, Light Song, has been launched with a vinyl release of the album 'Ancient Roads' by Yorkshire's Americana unit The Paul Mirfin Band. The album was issued independently last year. The band played an acoustic set in-store at HMV Harrogate on the 26th October to launch the release and the following day headlined at the True North event before a 400-plus audience.