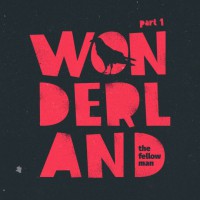 THE PORTUGUESE band fronted by Bruno Mira, The Fellow Man, have released an album 'Wonderland'. A video of the title track is also released.