World In The City

Pennsylvania-based Crown Of Roses release "World In The City" single 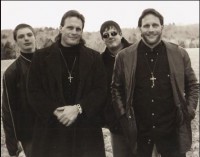 THE HARD music band from Le Raysville, Pennsylvania, Crown Of Roses, have released the single "World In The City". An album of the same name is set to be released next year.

The "World In the City" (3/song/Single) was Mastered by Pete Maher, Top Floor Music, London, United Kingdom and Distributed by Ditto Music, Liverpool, United Kingdom.Available @ Spotify, iTunes, Pandora, Amazon, and most @ most musical platforms. The forthcoming "World in The City" album will be the band's 9th studio LP, Produced by Michael Glines. (Alternative/Inspirational/Rock/British Pop/Acoustic/Indie)