To Mayor Meredith and all our distinguished city leaders here today: Thank you for sharing with us this special live broadcast âBuilding On Foundationsâ.

First of all can I start by honouring you as leaders in our community. There is a scripture that says âWithout Vision, people perishâ; and leaders have such a responsibility to be visionary for the sake of the people entrusted to them. Today on this live broadcast you will share of hope and a future for the people of this city, something we all need to hear. As a leader it can be a lonely, challenging place, you are rarely acknowledged and quite often mis-understood for what you do. So well done, and thank you for standing in your positions in our city.

This is the third such annual broadcast we have held at Cross Rhythms. In 2003 we held âSomething To Celebrateâ where we looked to focus on the good happening across our communities. In 2004 we held âOn The Upâ, a recognition that from the lowest points of several years ago, and in the light of the Experian survey, the city was beginning to see a turning.

In the last 4 years after decades of under investment we have seen some foundational initiatives begun in our city: housing renewal, A500 city road links, regeneration investment. Weâve also seen, dare I say it, a significant change in our political system, and with the current demolition of Unity House there is the newly planned business quarter. As the Christian community in the city we have concurrently seen significant transitional changes taking place. Cross Rhythms community radio station launched as a pilot station and from January 2006 we build on this foundation with a brand new 5 year full time licence. In addition Christian activity and influence in the city has noticeably increased, not only in work with asylum seekers, prostitutes and the homeless, but larger community initiatives such as the Hope Centre and the forthcoming Bridge Community Centre in Birches Head. Undergirding this has been a phenomenal rise in the belief in the power of prayer, with on average 200-300 people coming to pray for our city, our communities and itâs leaders, every month for the last four years.

So it is at this point in 2005 that our theme for today is âBuilding On Foundationsâ. A lot of hard work has been done. A lot of key projects have been started. But this is only the foundational beginning. What type of city are we going to establish on those foundations? Do we have the perseverance and commitment to keep building? Will we have the courage to keep pressing forward and not look back. To truly dismantle the Unity Houses of our past. Those old ideals of small mindedness, parochial short sightedness, the constraints of poverty mentality and lack of investment. Unity House old wineskins that stand proud and tall, but upon inspection no longer contain any substance.

Today we would like to present to each of you, our city leaders, a gift of a picture that shows the process of new building taking place. In the background the old is coming down, and in the foreground the new is beginning to rise. As a Christian, representing a 2000 year old organization, where the CEO is still alive, fresh and relevant, we have added a scripture from the prophet Isaiah which reads: âYour people will rebuild the ancient ruins and will raise up the age old foundationsâ. The age old foundations referred to here speak of our spiritual heritage, an age-old foundation that should never be moved. The very name Stoke, comes from the Celtic Stoc meaning Holy Place.

Regeneration and renewal is much more than changing physical appearance, and introducing better systems and management. It is about raising peopleâs spirits and aspirations. Fundamental change involves a renewal of the heart. Indeed down through the centuries it has been the combination of city renewal and spiritual revival that has produced vibrant communities. For example the Methodist revival sparked by John Wesley that had huge impact on the hearts of people and swept across our region also combined with a physical/economic progression through the pottery industry led by Josiah Wedgwood.

As we enter a new phase in our city it is our hope that the structure we build, together, combines the best of both. Speaking as Christians our hope is that we will have the vision to engage, serve and support the wider activities, systems and leadership that you represent in our city; and at the same time we hope to find a city leadership that is willing to continue to embrace us as partners in our joint vision to serve our community and improve their lives in body, mind and soul.

For more information see Building On Foundations: 20 City Leaders Look To The Future 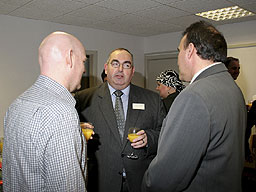 More in Past Community Celebration Events..