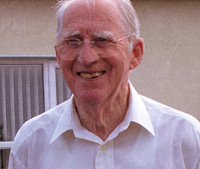 I'm a donkey, God's donkey. Most of the time I want to be a race-horse, going, doing and daring for God. I want to preach to thousands, have a world-wide known ministry, evangelize in tents which have ten poles instead of two. I want everyone to know that I'm Peter Newman, God's servant, God's man for the day.

The donkey isn't a particularly attractive animal. He doesn't tell his rider where he should be going. He's only the vehicle. The donkey has no say in his own destiny he is merely obedient to his rider. In countries like Israel, donkeys are so commonplace that people hardly notice them. It's the person sitting on his back they look at.

When Jesus first told me that he wanted to ride on my back like He rode on the back of the ass's colt going into Jerusalem, I was offended. "People won't see you, Peter," the Lord said to me. "They will see Me instead." "That's all very well, Lord," I argued. "But what about me?" Now I knew in theory that I was only a vessel designed to carry a very precious treasure and I knew, like John the Baptist, that I had to decrease so that Jesus within me could increase. My mind knew it all and accepted it all, but my pride thought that it was too much to ask.

I've found it far from easy to become the donkey God told me to be. I've kicked against the pricks. I've sulked, fought, objected, wrestled, and then, when I've eventually come to my senses, I've given in.

I used to get discouraged when reading Christian testimony books. They all seemed to be written by such perfect people who, once they were saved, never did anything wrong, never failed God, never stumbled or fell. I've done all of these things, and one truth I've discovered is that God is bigger than our mistakes. I should have known that from reading the Bible. Didn't Moses, the great deliverer, once kill an Egyptian and flee in the back of beyond? And wasn't it there that God dealt with his wilfulness and brought him out as pure gold?

So my story, then, isn't one of a shining, successful Christian who never has doubts, fears or misgivings. But it is one about God's very gracious dealings with an ordinary human being. I like to think that it's a story of hope and assurance that he who started a good work in a man will see it through until the day of Jesus Christ.

The opinions expressed in this article are not necessarily those held by Cross Rhythms. Any expressed views were accurate at the time of publishing but may or may not reflect the views of the individuals concerned at a later date.
About Peter Newman

Peter was a young runaway who fell foul of the law and hit rock bottom when he joined the ranks of the down-and-outs on London's Thames Embankment.

Since God turned his life around he has been both an evangelist and preacher all over the world.

Peter lives with his wife Barbara in Conway, Wales. They have three children and five grandchildren.

If you would like to get in touch with Peter, please email Cross Rhythms and we will forward your message on.

View all articles by Peter Newman

Thank you for making the future look good, like it has hope !