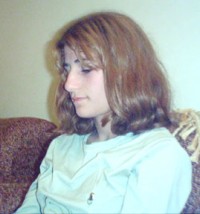 Those who hope in the Lord will renew their strength (Isaiah 40:31)

Asya Muhammad's father, an Iraqi Kurd, converted to Christianity while working in Beirut in 1998. Upon returning to Iraq in December 2002, Ahmad Muhammad began to share his faith with his family. His father, a Muslim cleric, became enraged when his son's wife, daughter and one son were baptized in 2003.

"My brother [Sayeed Muhammad] has tried to kill me five times since 2002," Ahmad Muhammad said in 2007. "Four times he tried to shoot me, and once he burned my house down. I've lost my house, my car and now my family."

On July 9, 2006, Sayeed Muhammad came to his Christian brother's kitchen utensil store in Mansouria on the outskirts of Dohuk, declaring he wanted to teach his female relatives a lesson for the disgrace they were causing by working in public. In that region, it is considered unacceptable for women to work in public.

Ahmad Muhammad, the girl's father, was not at the store when his brother, father and cousin arrived. Sayeed Muhammad began to beat his brother's wife, Mayan Jaffar Ibrahim, and sliced her right temple with a knife, according to a medical report. Ibrahim then fled the store in shame and ran home, lawyer Al-Najar said. With Ibrahim gone, Sayeed Muhammad attacked Asya Muhammad and her younger brother Chuli.

Struggling to free herself from Sayeed Muhammad's grip as he tore at her hair, the Christian girl reached behind her with her right hand and grabbed one of the store's knives, instinctively striking at her uncle. The knife went through his heart, killing him almost instantly.

Asya Muhammad has been kept in Dohuk's juvenile prison ever since, receiving visits from her lawyer and local Christians twice a week. With relatives demanding Asya Muhammad's death as compensation for the killing, Ahmad Muhammad, his wife and three sons have been forced to close down their store, split up and go into hiding. A fourth son in his early 20s lives with Ahmad Muhammad's father. Initially, Ahmad Muhammad's mother demanded that her own son be killed as atonement for his brother's death, a source close to the family told Compass news agency.

"Here it is normal for a father or an uncle to be able to slap his daughter or niece and no one will be able to say thing about it," commented one Christian, explaining why relatives did not believe the girl had the right to defend herself. "The reaction [knifing Sayeed Muhammad] was considered much too great for the uncle's action."

Asya, who changed her name to Maria when she became a Christian, is expected to be released early. According to the pastor who gave this information to Compass, Maria will walk free as soon as Kurdish Regional President Massoud Barzani approves the decision.

In February, Maria's father reached a financial settlement with his dead brother's family by which they agreed to support the young girl's early release. She had been condemned to serve 3.5 years in prison.

"She is very sad, but she has great hope," said Pastor Mizory, who visited the young girl in prison yesterday. "She gets thousands of letters from all over the world. She keeps some with her and she tries to read the others before giving them to her father to take them home."

Thank you to all of you who have prayed for and written to Maria. She knows that she is not alone, and now she has hope of early release. Glory to our God who answers prayer!

I sent Maria a letter two years ago. Is she still in prison? I would love to know her situation now.

Apparently she has just been released from prison due to her exemplary behavior. Her family is now considering moving north to Kurdish Iraq due to fear of reprisals from their extended family.

Is Maria still in jail? I was wondering if my elementary age Sunday School class could write to Maria. It sounds like she is already getting a lot of mail. Let me know if there are others who aren't getting any letters.