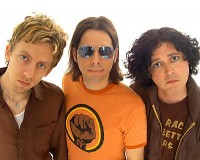 Admiral Twin are one of those bands who bring an immediate glint in the eye to cooler aficionados of alternative pop rock. The trio from Tulsa, Oklahoma have never quite got to the upper echelons of music biz success. But what they have done is build a loyal, and still growing, fanbase who view each of their albums with an awe little short of reverence. For in truth, bassist/vocalist Mark Carr, guitarist/vocalist John Russell and drummer/vocalist Jarrod Gollihare have, down the years, produced some of the most creatively original and downright enjoyable music from any band, Christian or non-Christian. Their harmony-infused three-minute rock explosions and eccentrically witty pop experimentations make them unlike any other band in the marketplace. Their latest album, 'Center Of The Universe', has been called "a mix of Fountains Of Wayne with The Beatles and Cheap Trick." John and Jarrod took time out from their busy schedule to talk to Cross Rhythms about Admiral Twin's present and past.

I asked Jarrod whether he could nail down the band's rampant eclecticism. "Our stylistic influences have always been all over the map. Growing up in Tulsa, Oklahoma, we were exposed to equal parts rock, blues and country on the radio when we were kids. We were all total radio junkies. Plus, we all sought out 'left of center' music early on in our lives - college/alternative rock, film soundtracks, experimental stuff, etc. And we still do. We're always on the hunt for new bands and new sounds. So for every Admiral Twin record, we all bring this big mishmash of influences to the creative table. For 'Unlucky,' I remember specifically I was listening to a lot of Radiohead at the time, and Jellyfish, and Split Enz/Crowded House, and Blur, and (as always) The Beatles and ELO. But I wouldn't say those groups influenced that CD any more than any of the other music I listened to my whole life."

The band's official biography advises that Admiral Twin were formed in 1996. Well, in fact their history goes back sometime before then. Explained Jarrod, "We were all heavily involved in the Tulsa music scene for years before we got together. I was in a pop/rock band called Beatnik Pirates. John was in an alt rock project called State Of Mind. Mark was in this trippy little combo, Tom Gray's Dream, and Brad was playing with a techno group called Painted Orange. Very, very divergent styles. When we first formed, in 1991, we were called Mellowdramatic Wallflowers and we had a different guitarist, Steve Francen, a really talented guy. After a few years, though, he wanted to pursue his own thing, musically, so he left. John's band, State Of Mind, had just broken up, so we asked him to come over and practice with us and we all just clicked right away. That was around 1995 or so. We changed our name to Admiral Twin a little over a year later."

Added John, "We're sort of the misfits of broken up bands. We used to have a fourth member, Brad Becker, but he got out of the biz to pursue a career that was more sane, stable, profitable and considerably less heartbreaking." John went on to explain the band's unusual name. "We're named after a drive-in movie theater in Tulsa called the Admiral Twin Drive-In. It's a local landmark, been there for more than 50 years - still in business after all this time. We thought the name was a good way to show a little hometown pride. Plus, after a year of making lists of band names and arguing about them, it was the only one we could all agree on."

In 1998 the band recorded their first album, 'Unlucky'. Released independently, it got an enthusiastic response. But it was their next release, 2000's 'Mock Heroic', which should have launched the band into the big time. Explained John, "We had just gotten back from a very successful tour and signed a contract with a subsidiary label (Mojo) of Universal. 'Mock Heroic' was poised to be the big push for our career. As it happened, the label we were with was in financial trouble and folded just after the album was released. The end result was that it actually sold less than our previous independently released album. Thus, it was the best of times, it was the worst of times." Added Jarrod, "Our morale definitely took a big hit the day our lawyer called us - completely out of the blue on a sunny afternoon - to tell us the label had folded and we were 'free' of our contract. The word 'free' had never sounded so ominous. I mean, the CD had only been out a few months! We worked so hard on those songs, and then it's like they all just DISAPPEARED. I think that record had a lot of potential that was never realised."

After the marketing debacle surrounding 'Mock Heroic' lesser bands would have folded. But Admiral Twin continued on with hard gigging and a series of independent releases, the EP 'Christmas' (2001), 'Odds & Ends: Demos & Rarities 1996-2000' (2002) and 'Creatures Of Bread & Wine' (2003). I asked John about the intriguing 'Creatures Of Bread & Wine' title. "The interesting thing about the SONG 'Creatures Of Bread & Wine' is that it hasn't been written yet. But we like a good challenge, so perhaps you should look for it in the future. That ALBUM was the only one thus far where we actually got together in a rehearsal space and worked up the songs in a traditional manner BEFORE we recorded them. Every other album we've done has sort of been culled together over time with songs coming together in the studio."

Jarrod added his bit, "We took the name 'Creatures Of Bread & Wine' from a phrase used in an Anglican prayer book, from a Eucharist prayer. While we were making that record, all three of us were experiencing some very dark periods in our personal lives. It was pretty crazy, life was dealing us some harsh blows. So that phrase just seemed to fit how we were feeling at the time - very, very mortal and weak and fragile. Even though we're all spiritual beings first, no question about that, I think we were all feeling very earth-bound then."

After another Yuletide EP, 'Christmas 2003', it was a long wait until the latter end of last year when the truly stunning 'The Center Of The Universe' hit US record shops. Critics raved about the project with CCM magazine being typical. Journalist Chad Bonham wrote, "The band's latest, 'The Center Of The Universe', is a 15-track smorgasbord that pays homage to some of the most influential artists from the past 35 years, from '80s Euro pop/rock to Americana. The electronic-infused, Latin-flavoured 'Smash It Up' takes a hard shot at corporate radio. The danceable pop of 'Get Well Soon' is indicative of genremates Wilco and Matthew Sweet, with an array of psychedelic guitar effects and an active bass line. Lyrically, the band backs its big sound with even bigger philosophical, emotional and spiritual ponderings. With 'Fear' the band projects a sweltering wall of sound that would make Radiohead or Coldplay proud, while questioning the nature of self-induced trepidation. The acoustic, country/rock gem 'If Hell Is Like You' takes a tongue-in-cheek look at how a rocky relationship can push someone toward a life of faith."

Particularly stunning throughout 'The Center Of The Universe' are the group's switched leads and tremendous vocal harmonies. Said John, "We all share in the leads and harmonies. It's probably the pinnacle of what we do as a band. As such, it can be both challenging and fun to try and find new and interesting ways to either harmonize or sing countermelodies, etc." Added Jarrod, "We're the bane of many a poor soundman's existence - three vocalists, a different lead singer for every song (sometimes changing lead singers from verse to chorus to bridge section), lots of background parts and ooh-ing and ahhh-ing going on, etc, etc. And this all happens while we're thrashing away at our instruments at full volume. I certainly wouldn't want to run sound for us. We're rather high maintenance onstage."

It took two and a half years to record 'The Center Of The Universe'. Said Jarrod, "Two of us got married, one of us became a daddy, we had some business and personal crises to deal with - a whole lot of moving and shaking was going on. It seemed like every time we'd really get going on recording again, something else would come up and shut us down for a few weeks (or months). Of course, all that down time also gave us a lot of opportunities to re-listen to the tracks we'd recorded up to that point, to scrutinize what we were doing and really tweak the sounds, arrangements and mixes to our liking. This is a band comprised of three songwriter/vocalist/producers, after all - there was certainly PLENTY scrutiny to go around."

Having produced a creative masterpiece in 'The Center Of The Universe', the band are now busily gigging. One of their dreams is to get to play Europe. Said John, "We're chomping at the bit to play in Europe! It's almost happened a couple of times. But, as it often goes in this business, the plans fell through. We certainly haven't given up on the notion, though. It comes up in our conversations quite often."

Not surprisingly, in view of the band's highly literate lyrics, each member of Admiral Twin is a confirmed bookworm. Jarrod confessed to having three books going at any given time. "I've been re-visiting my favourite Kurt Vonnegut novels lately (I'm a huge fan), particularly Breakfast Of Champions and Slaughterhouse Five. Other recent reads: Franny And Zooey by J D Salinger (another of my favourite authors), The Curious Incident Of The Dog In The Night-Time by Mark Haddon, Rip It Up And Start Again: Postpunk 1978-1984 by Simon Reynolds, and The Prize Winner Of Defiance, Ohio by Terry Ryan. I'm just starting A People's History Of The United States by Howard Zinn. Fun stuff, that."

John added his book list: "I've recently read If Chins Could Kill: Confessions Of A B Movie Actor by Bruce Campbell, A Heart At Fire's Center (a biography on film composer Bernard Herrmann) by Steven C Smith, Future Shock by Alvin Toffler, and a collection of short stories by Richard Matheson. I'm currently reading The Code Of The Woosters by P G Wodehouse and In The Days Of The Comet by H G Wells."

In a music scene where far too many bands have tied themselves up in theological knots as they ponder the twin paths of Christian music and mainstream, Admiral Twin are refreshingly thought out about the belated enthusiasm shown for their music by America's CCM gatekeepers. Said Jarrod, "We've got no qualms whatsoever about the Nashville CCM scene. Those folks are music-lovers like everyone else, that's what matters to us. In fact, we place no boundaries whatsoever on the kind of scene or people we associate with - as long as THEY don't put any artistic boundaries on our music."