Bedworth-based worship pastor ANDY BROMLEY is now getting a big push from Kingsway Music for his 'Love Mercy' album. Mike Rimmer met up with him. 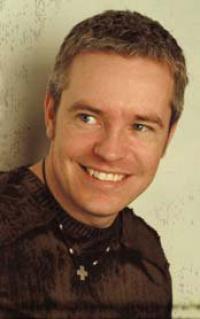 On a lovely summer's day out in the countryside near Coventry I meet Andy Bromley at the Conference Centre known to those in the know as "Oakwood". The building is owned by his church in Bedworth, where he is the worship pastor, and is used for The Academy, a worship-training course that is run by Andy and Chris Bowater. We relax in the lounge to have a chat.

Andy chats amiably as he shares about his upbringing in a variety of AOG churches. His father was a minister and the family moved around quite a bit. He comes from good Christian stock and it seems inevitable that he should go into ministry. He remembers, "There were some little signposts along the way. When I was a kid growing up, we used to have missionaries and different Christian ministries and leaders come and stay at our home. A number of them along the way would bring some prophetic words, or some little signs of what the future might hold for me. Invariably, they were all around the area of worship. I made a decision when I was about 20 to head into the worship area rather than becoming a Christian music artist."

Like many youngsters in church, the worship of his youth wasn't always to his taste. And sometimes he was a little naughty! "I always remember doing this thing where a hymn would be chosen out of the Redemption Hymnal and it would have seven verses. So I would always sing a verse on from everybody else. Like, I'd sing verse two when they're singing verse one because psychologically, it just felt like the song was going to end quicker!" He pauses as if considering this and then adds, "I don't know why I used to do that! But we used to go to the conferences and there would be people like Chris Bowater and others leading worship there. There'd be drums and basses and guitars and everything would be SO different! It was a very refreshing place to go to because it was obviously where God was wanting to take the Church, but a lot of churches in the early '80s were struggling with the idea of having a drum kit on the platform."

Looking back, a lot of Andy's future was caught up in those young experiences. He confesses, "As a child I used to watch Chris Bowater. It's amazing how God would make a note of this but as a 12 year old boy standing in conferences, I thought to myself, 'I'd love to do what he's doing!'" Years later in 1994 when Andy was invited to become worship pastor at Bedworth, he needed advice and although he didn't know Bowater, called him to see if they could meet for a chat. Out of that phone call has blossomed a relationship where the older worship leader has mentored the younger.

Up until now Andy's music ministry is probably best known to Joe Public for his work on the live worship albums recorded at Grapevine. In 2002 Andy recorded at the db Studios which Chris owns with his son. That independent album, 'Glorious King', had as the title track the singer/songwriter's best known song up 'til now. A year ago Andy became head of worship music for the AOG denomination. It's a role that he is slowly growing into. He admits, "It's a new thing I've been coming into and really it's the responsibility for worship at the conference at this point in time. We're just beginning to look at ways where we can incorporate different things within Assemblies Of God from a worship-training point of view."

His Kingsway Music album 'Love Mercy' shows a strong step forward from his previous release. It was recorded partly at db Studios in Lincoln and partly in Nashville under the guidance of award winning English-born producer John Hartley with a host of top Nashville musicians contributing. The result is an astonishingly fresh album that highlights Bromley's skill as a writer. Ironically one of the highlights is where he covers a Robert Critchley song, "Praise The Mighty Name Of Jesus" which features a duet with America's CCM/country star Susan Ashton.

Andy wasn't sure about the song initially. He remembers, "I'd never heard of it. To be honest, on first listen I wasn't that sure. I took a bit of persuading but when I actually came to record the song, there was a great anointing on what was happening in the studio. I've carried the song to a lot of conferences and it's amazing to see the windows in people's lives that have been opened as a result of them drawing nearer to God through it."

Andy was always a fan of Susan Ashton's music. "I'd known Susan's albums from years gone by and it was a pleasure to meet her. Funnily enough, she had a very similar upbringing to myself. So it was good to find some common ground. And she's an incredible singer as well. Susan's got a great voice. It's kind of 'out there' in another stratosphere compared with mine! But it was a pleasure to sing a duet with her. A great experience and yeah, it's a great song."

'Love Mercy' deserves to introduce Andy Bromley to a wider audience who will discover this humble, gifted worship leader with a heart to see worshipers truly encounter God. With opportunities to minister across the denominations, one thing is for sure. You'll be hearing a great deal from this man in the coming months and years.

I live in South Africa. A lady from the USA came to Africa on a missions outreach and I met her.
She gave me copies of some of your music albums. I LOVE YOUR MUSIC!!
It is however, not Biblical to have copies of cd's since they have copy right. Therefore I am asking your permission to listen to this music I received.

My reasons being the following:

* Your music is not available in South Africa - at least as far as I can see.
* Internet transactions is not available to South Africa, because of the high crime rate. For example, I am not allowed to buy music from iTunes, Ebay, Amazon because I live in South Africa.
* I cannot order cd's from overseas, because it will never reach me, because of the high crime rate in our mailing system.
* I do not own a credit card nor can I afford one to buy overseas/internet based items.
* I don't have people coming from the USA to visit Africa who can bring cd's from there.
* Your music is so awesome, and I would hate to not being able to listen to it

Therefore my request that you will grant me permission to listen to your music that this lady gave me.

Looking forward to hear from you soon.
Blessings
Annemie