Andy Chance: Chance would be a fine thing

With an album title 'Lose Faith Now, Ask Me How' guaranteed to send more religious sensibilities into overdrive, Luton's ANDY CHANCE is walking on eggshells. Chris Tozer spoke to him. 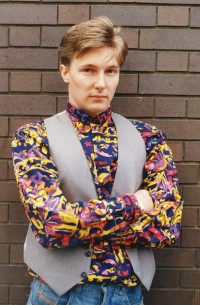 Anyone who writes a song called "I Don't Want To Punch Your Face - Let's Just Fall In Love" could hardly be accused of churning out predictable lyrics. Indeed you could be forgiven for thinking that Luton-based pop gospeller Andy Chance indulges in some pretty weird ideas. Just reading the track listing on his latest album 'Lose Faith Now, Ask Me How' would be enough to convince you that we're not dealing with your average Christian lyricist.

I mean, who else would write a song entitled "You Won't Get To Heaven If You Smell Like That" and the "Rev Judas Theme Tune"? I asked Andy if it was all a bit removed from "Worthy Is The Lamb".

"Many Christian writers come from a worship background," Andy told me, "and they come out with songs like "Jesus Is Nice" and "God Is Lovely". Don't get me wrong -1 agree with the sentiment, I just don't want to buy the CD. Music should be challenging and thought provoking; it should have a message. Just listen to 'Park Life' by Blur - it's a great example of a song with something to say."

Andy then reeled off a list of musical influences, including Meatloaf and Elvis Costello. "Common to all of them is the ability to write a story set to music," Andy pointed out. "Even the titles of their songs paint pictures." But wasn't he indulging in even more questionable imagery than his secular counterparts, I wondered, with songs like "Punch Your Face" and "Smell Like That"? Andy was unrepentant 'Too often people worry about what will offend when what they should be doing is stimulating and provoking a response. Christ himself was frequently controversial." I concede the point and decide to change tactics. Surely, such an off the wall performer must paradoxically have had a pretty dull upbringing. I was soon corrected.

With a few friends Andy formed a heavy metal band when he was 14. "The biggest, most explosive name we could think of was Hiroshima - the place where they first dropped the atom bomb! We sounded alright but the vibe was bad; we sang songs like 'Hell Ain't A Bad Place To Be' which really glorified the Devil. Years later I would hate myself for recruiting for Satan, but now I realise that it was an invaluable experience for use in God's Kingdom. It mast also eat at the enemy that one of his own side has defected to be an evangelist for God."

10 years ago Andy's family moved to London where he worked in various recording studios alongside the likes of the Pet Shop Boys and the Communards. "The experience taught me that the pop business was not for me," admitted Andy. Want To Punch Your Face - Let's Just Fall "Many of the studio staff were on drugs and the In Love" could hardly be accused of long hours caused many a divorce. So when I got married to Kathy I started a job at the local council where the pay is better!"

I suggested that our happy couple were destined for the quiet life of leafy Luton. "Hardly," said Andy, never one for understatement "That's when the kids arrived with all their troubles." Their son, Daryl, was born five years ago with a hole in the heart As if that wasn't enough trouble; he also has a missing valve and three chambers of the heart instead of four. Even his arteries were deficient.

Although everything seemed hopeless, their minister's wife galvanized the church prayer-line into action. When down at London's Great Ormond Street hospital the next day the doctors were able to paint a far brighter picture; both Andy and Kathy knew that God had intervened.

Not that they were out of the woods by any means. More complications and operations were to follow. "We were even told that Daryl might never be able to speak," said Kathy. "And he had fits for about a week. So they gave him a scan because they thought he could be brain damaged. But you don't care. You think, 'At least he's still alive and we can take him home.'"

Although assured by the doctors that Daryl was a one-off, their worst nightmares were realised when their daughter Jenny was born in 1994 with a similar heart problem. The frayed nerves and the prayers returned in earnest And although a second baby girl, Amy, was born completely healthy, the whole experience led Andy and his wife to set up a heartline charity to support other parents who found themselves in similar circumstances.

I asked Andy how he was able to carry on his ministry after so many traumas surrounding the births of his children. "While I was in hospital," Andy replied, "I promised God that if he ever got me out of this mess, then I would tell people of his love. He fulfilled his part of the bargain. I am currently doing mine."

That brought us conveniently back to Andy the performer, so I asked him to tell me about a typical concert "Well," he began, 'for a full blown gig I would normally have three TV sets and a giant screen to relate various images in time to the music. The words tick over to enable the audience to follow the lyrics.
"Between songs we have up to four video cameras which link up to a mixer to show the audience a live picture while we cue up the next tape. The whole show is scripted; the links, the drama, the puppets -everything. I find that it is the only way that I can be sure that the songs link together with one message - which currently is - 'Don't lose faith'."
Having heard the aforesaid latest album 'Lose Faith Now, Ask Me How', I feel that it's time that one of those recording 'powers-that-be' should nip down the motorway from Milton Keynes and exercise a little faith in a guy with a great voice and consummate songwriting skills who is sitting on their proverbial doorstep.

Meanwhile, I'll leave the last word to Andy, who told me, "For me, the vision is still the same as it has always been; to preach the good news through the gift of music, or to put it another way - we only play for Jesus."