Remember the Spirit Song search-for-a-demo competition run by Cross Rhythms back in 1995? The winner ANDY READ now has a CD out. And he's offering it for free. Chris Tozer reports. 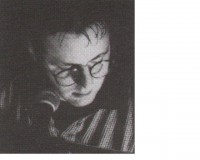 It would be reasonable to assume that anyone who has been involved in CCM since 1980 and has recently released their fifth album must at least be well known among readers of this magazine and likely to be featured on Channel 5's The Alpha Zone. So far such fame has evaded Andy Read of Winchester. But then this gifted singer/songwriter has hardly set out to court the spin-doctors of gospel music. His name has rarely graced The Event page as his concerts have been few and far between.

Andy sees himself primarily as a songwriter and has concentrated on his albums which he regards as a set of musical diaries - "a finished hard copy to give to people for encouragement." But in his album 'Happy Friday' - his first on CD - Andy feels that he has a quality product to promote so he is aiming to tour the country in the autumn. Financial support through his church enabled him to spend three weeks in the studio last summer with producer Kerry Minnear, a man whose fascinating record history takes in spells with '70s secular prog rockers Gentle Giant and '80s praise and worshippers the Reapers. Andy has known Kerry for over 15 years. "Kerry brought such a rich feel to the album," Andy told me. "He's an undiscovered genius of Christian music.

Andy's musical roots are a little different from many CCM performers. "I was always the odd one out at school when it came to music. While all my friends were raving over Bowie and Glitter I was listening to the jazz of Oscar Peterson and Dave Brubeck," Andy continued. "I was mesmerised by their sense of rhythm and captivated by the singing of Manhattan Transfer before stumbling across rhythm and blues after watching the Blues Brothers."

Andy cites Keith Green and Phil Keaggy among early musical influences and more recently Delirious? and the Sister Brothers. "I've also learned so much about the art of songwriting from Paul McCartney and Paul Simon - simple yet effective melodies that go somewhere and words that are unambiguous and mean something."

Working as a primary school teacher, Andy has produced four self-financed tapes from '86 to '94 with '94's 'Welcome To Truth' containing an infectious number "The Truth Will Set You Free" which went on to win Cross Rhythms Spirit Song competition in 1995. Andy won a Â£300 Spirit Folio Lite mixer as a result of the competition. Surprisingly, Andy is rather critical about his early recordings. "The music was like a dirge and the words reflected life's struggles. But I've come to realise that people want to be motivated by music that is fun to listen to. Five years ago I would never have bothered about that -thinking it a waste of space on an album. But people get encouragement when the music is relaxing."

It is so facinating to be able to find and know something about andy who i personally feel is a unique christian artist. I have been looking for andy over the internet. I had his HAPPY FRIDAY album i loved it but i lost it i really missed the album. Is there anybody who can sent me a copy. It seems that people hardly hears , know about andy read and his music . I feel he deserves better he is so talented. His music is so different and his song writing just captures your imagination. We will be expecting more from andy. Hope someone send me his happy friday