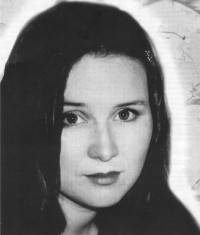 Tony: Can you give us a potted biography?

Angie: I was born and raised in Arkansas, but not in the traditional Arkansas way, by any means. My parents were missionaries from the time I was five and allowed me to participate in the travel, some light work and all the other amazing aspects involved with missions. I spent significant periods of time in Guatemala, Miami, LA, Hawaii, Romania, Belarus, Mexico, Western Europe, in addition to other places, working with other Christians from around the world on various projects. I only began writing music when I finally had something to say and I guess I was a bit of a late bloomer. I was 22 and life had been a bit of a fairy tale existence for me up to that time. I loved God. I loved my parents and admired their life choices. I had never really experienced what most people would consider "a major bump in the road." But as God began to allow me to be tested deeply, I began to express those struggles and revelations through music. Since then, I have felt that God has always been in view, though not always in the way I would have chosen, gently beckoning me to take the next step toward him, which inevitably has also led to the next step in fulfilment. I trust him more today than I ever have. Music has been a great way to express the passion of my relationship with God, and I'm incredibly happy to be doing it professionally. But ironically, now I'm learning more than ever before that music is not my source of joy, peace or fulfilment, and I could I do without it if I needed to but I can never do without him.

Tony: You're making your second visit to the UK in March. So what's drawing you to a country which has little in the way of a Christian music scene?

Angie: That's something that comes from my missions background. I don't make decisions to go to a place based on the local music scene or lack thereof. I go because I'm drawn. I'm just trusting that God's grasp on marketing principles is better than mine.

Tony: Do you ever feel to be somewhat in the shadow of your famous sister?

Angie: Not at all. My siblings and I have always been best friends. We share in each other's successes and failures as if they were our own. Twila is an incredible writer and performer and I have deep admiration for her professionally. But she was my wonderful big sister first, and always will be. She has been such an undergirding of support to me since the day I started...and when you're lifting someone up you can hardly cast a shadow on them, can you?

Angie: Well, Twila is one of the obvious influences, both musically and lyrically. Most of my other musical influences come from the worlds of jazz, folk, R&B, pop, etc, many of whom are British. Peter Gabriel, Sting, The Cranberries and Annie Lennox are a few. Then there's Jonathan Brooke, Nanci Griffith, Shawn Colvin, Nat King Cole, Chopin, Mozart. the list could go on forever. God has put so many talented people on this earth, and many are not Christians, so this is not a list of Christian musicians, as I'm sure you noticed. But as I said, those are my musical influences. My lyrics have been influenced not by musicians mostly, but by Biblical principles, personal experiences with God and by godly teachers, writers and mentors.

Tony: How would you describe your ministry? What are you trying to do spiritually with your music?

Angie: I want to express the love and merciful grace of God, and his undying desire for reconciliation with the world in an accurate and loving way. I want to do my part as I grow in my love for him and others. Only God can bring the actual fruit of the ministry.

Tony: Who's been the greatest spiritual influence in your life?

Angie: Under Jesus...far and away, my mom and dad. Dad is a tireless and wise teacher. Mom is a sweet and gentle listener. The combination is great, because it brings correction and comfort at the same time. They model Jesus for me. I just want to add that I cannot wait to get back to Britain. I love the United Kingdom, and I love my many friends there. See you in March!