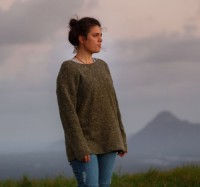 It's been said before that it's very, very hard for an "unknown" independent artist to make radio station playlists. For a start, most stations won't even consider putting a track on their main playlist and if they play any independent releases at all they're hived off into a single weekly programme with a name Unsigned or Independence Day. Yet Anna Beaden from Queensland, Australia has made it to the Cross Rhythms playlist with her delightfully summery track "Better Days". Cross Rhythms tracked Anna down - she's currently working at a summer camp in the US - to get her story.

Tony: Have you always lived in Queensland?

Anna: "Yes, I grew up there from when I was zero, I guess, until I was 18 and then I moved to New South Wales, our rival state in Australia, to study teaching. Then I moved back to Queensland for my teaching job. My parents were very passionate about God, very involved in the church. They weren't really upfront people but my mum worked in the kids ministries for ages; as you can tell she really loves kids. My dad was always the treasurer, worked on the sound, all the kinda behind-the-scenes jobs. They love God very much and that definitely flowed into my life."

Tony: How did you get involved in music, were you a musical child?

Anna: "I always remember we had this toy microphone that I was always running around with. My older sister Kate, she's number three, I'm number six; she knew how to play the guitar pretty well and when I was about 14 I bought some bongos. We actually made a little band called Roger. We didn't actually know anyone called Roger, we just liked the name. We had three solid gigs. I had this massive blackboard in a room in our house and I would just write lyrics and Kate would write songs, and I would get a guitar every now and then and try and copy her. I think that was really a major thing for me. I ended up knowing the guitar a little bit and I got piano lessons for a year or two as well, because someone came and was a boarder at our house, and they were really good at the piano. So mum said, 'If you teach all my kids to play piano then you can stay here for free.' So we ended up playing piano for a bit, and it was just really cool. I wrote my first song when I was 13 and realised that yeah, I really liked writing songs. I only knew how to play the individual notes, but then when I was taught cords it felt like a whole song-world opened up."

Tony: You were about 18 or 19 when you actually recorded your first EP, weren't you?

Anna: "Yeah, it was called 'Simple Joys' and honestly, that was given from God. My sister worked with this guy who actually built a recording studio in the bush, and I used to go over to his house in the afternoons and we would just muck around and record random stuff. He was so good, he literally recorded me for free."

Tony: What subjects and what age group do you teach?

Anna: "I teach secondary students, so Grades 7 to 12. I was trained in religion, mathematics and PE, but then when I got out into the field half my load was teaching music to the primary school - we've got quite a small school - and then over the three years that I taught, I just kinda worked my way up to teaching pretty much full time drama, with religion, and then a side of maths and a little bit of PE. I really love drama now, so I consider myself a drama and religion teacher - those are my passions."

Tony: In 2016 you released the seven-song mini-album 'Living Words'. Tell me about that project.

Anna: "In my second or third year of college, I actually won two days of free recording through this competition. I pulled in a few friends, and when I record I like to do it really efficiently, so we ended up getting that whole thing recorded in two days, which is pretty awesome. That CD came about freely as well, which males me feel very blessed in the journey. God has opened up so many doors for me."

Tony: It was the eight-song project 'Captured Epiphanies' that landed you a Cross Rhythms radio hit. Tell me a bit about recording that.

Anna: "It happened in my third year of teaching. I had a student, Sydney Wolverton, who was really awesome at writing songs. She was in Grade 12 at the time, and I said to her, "Hey, I'm thinking of recording another EP, do you wanna also record some of your songs and we can share studio time, share musicians that we both know, and I'll mentor you through the process?" We wrote the song 'Better Day' together and the recording of it came out on both 'Captured Epiphanies' and on Sydney's mini-album 'Candid'. She's an incredible artist and it was a really fun process recording with someone else. It was produced by Reece Zacker from Spinlight Studios. We road-tripped 12 hours to him; all of us, the crew, and it was honestly such a good week. We camped out at this church for the week and it was just so amazing. There were six of us in the band and we just jammed every night and played games. It was honestly the funnest recording weeks I've had. We would go to the beach every afternoon and swim and de-brief about the day. We spent six solid days straight in the studio and we pumped out 12 or 13 songs altogether."

Tony: So how did the song "Better Days"come about?

Anna: "Yeah, super easy. We went on a mission trip to the Solomon Islands, that was in 2017. I actually led the trip and had 16 Grade 11 and 12s with me, and at the very end of it Sydney and I and two other people were sitting on the jetty, and we were like, 'We should write them a song, just to say thanks so much for having us here and the things that we've learned.' So we were reflecting, saying how we don't want our lives to just go on the same because we'd been so touched by these people who have hardly anything, and we, in Australia, have so many things. Sometimes we can get quite overwhelmed by it. The simplicity of their lives in the Solomon Islands and their love and care for people really spoke volumes to us, whereas we're like, 'Oh yeah, we'll catch up with you in a sec. . .' We don't really prioritise others as much as we should, our lives are very cluttered. So we wanted to sail away into a better day for having known these people - that was kinda the concept. In the original version of the song we also had this really funny rap of all our inside jokes from the whole trip. But then when we were recording it we thought we should probably make it more worldwide friendly as others wouldn't understand the rap part."

Tony: What about the future? Are there more songs on the way?

Anna: "Well yeah, so a month or two ago I actually quit my job this year, I'm taking this whole year off. I've had the goals in mind of travelling, doing summer camp has been on my list for ages so I'm currently living that dream. Writing more songs is definitely on the list. Throughout the travels that I've had, I actually bought a three quarter guitar that I can fit in my backpack, I had to throw out some clothes but it's worth it. So I'm just travelling with that, and I've been able to write probably six half songs; they always usually start in halves and then I kinda get around to completing them. But honestly, if I could say anything about my music, the song that I am most passionate about for our generation is the song 'Wool Over Your Eyes' which is on 'Captured Epiphanies'. How it came into being was, I was just sitting in a room after one of my Chapel band practises. All the kids had left, the piano was there; I hadn't played the piano in ages and I just sat down, pressed record on my phone, and in six minutes and 10 seconds this song came out. I changed 10 words. It starts with the Devil or the evil side talking, and then it's kind of humanity, kind of maybe where we're at, and then it's like God calling us back. It's got some random stuff in it, the word 'Netflix' is in there, 'iPhone' - different things. I've sung it in many places and so many people have said that song has called them back to God. I think particularly for young people, I dunno, it's the song that I'm most passionate about and the song that I actually really believe God gave to me on the spot."