Antonio Lucio Vivaldi: The sacred tradition and the red-haired priest 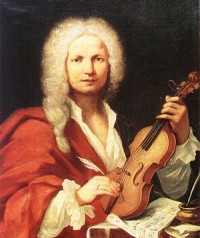 Gerbil eating trendy vicar runs off with opera singer' is probably what the Sun or the Mirror would have made of Vivaldi had they been around! (My apologies to Sun and Mirror readers...)

Vivaldi was born in Venice in 1678, a weak premature child, baptised by the midwife because she was unsure that he would survive. He is better known to us these days as an instrumental and operatic composer - no prizes for anyone who noticed Nigel Kennedy slip into the charts with Viv's 'Four Seasons' - rather than as a sacred composer.

Is this (you might ask) because he did not write any sacred music? Not at all. Is it because his instrumental and operatic stuff is better? Nope. The reason is that the other works were discovered first - and some of the sacred works rank alongside the best ever written:

"The fact that his church music is of such high quality that the best of it could be placed alongside that of Bach goes to show that, in keeping with his religious attitude, it was precisely the best music that he considered good enough to glorify God." Kolneder...(Who?)

The trouble that was taken with sacred works in Viv's time is incredible, for example in the "Crucifixus" (Credo RV591) text the bass part is written as quaver/rest etc. but actually sung as crochets. This has the visual effect to someone reading the score of making the page look sparse and desolate.

Maybe the idea was that if you depress the singers they'll respond with a suitably dour rendition of the work! Or perhaps it reflects the respect in which things sacred were held in those days - similar to the Jewish scribes who get up and wash their hands before writing the sacred name of YHWH "The Lord".

One of Viv's greatest sacred works is the non-liturgical Oratorio "Juditha Tri-umphans" written as a showpiece for the Orphanage where Vivaldi often worked (Ospedale Delia Pieta) in Venice.

It is a curious mixture of the Apocryphal story of Judith and Holofernes and Greek and Roman mythology, with Apollo, Mars, Furies and Cupids all putting in an appearance; a story full of heroic acts and eroticism. In the all-girl Pieta orphanage the Tenor and Bass parts would often be taken by ladies or by the tutors. One of the greatest arias is sung by Holofernes (Baddy), depicting the flight of a swallow buffeted by the wind, "Agitata Infide Flatu" (Driven by Perfidious Winds). Beans were obviously on the menu at the Pieta!

Vivaldi trained for the priesthood and in the 17th and 18th centuries it was not unusual for a career in music and the ministry to be combined - the sacred opera "II San Alessio' (1632) was by the subsequent Pope Clement IX, and the text of Handel's 'Agrippina' was written by Cardinal Grimani. In 1693 at the age of 15 Vivaldi received the Tonsure (Shaven head as in 'All Gas and Gaters') but the priesthood always came second to his music and theatre, which brings us back pretty well to the Gerbil eating trendy vicar who runs of with an opera singer...

As for the trendy vicar, Vivaldi was often on the wrong side of his superiors more by neglect than by intent. He had suffered from birth with a chest complaint 'Angina Pectoris' which takes the form of a pain in the chest, neck and shoulders caused by lack of oxygen reaching the heart muscle...usually brought on by exercise. In a defence of his decision to stop celebrating Mass Vivaldi complained that his illness was so bad that he had to leave the altar several times during communion - firing rumours in some quarters that in moments of intense inspiration he sneaked into the Sacristy to jot them down!

A contemporary Monty Python writes..
"He was referred to the inquisition which fortunately regarded him as a musician - in other words an idiot (!) and contented itself with forbidding him to celebrate mass from that time on."

Whatever the truth of the matter, Vivaldi's ailment was not so bad that he could not undertake long and arduous tours to promote his music. Remember we're talking about the early 18th century when the difference between a road and a ploughed field was that the road had deeper ruts.

Most of Vivaldi's sacred music was written for the Ospedale Delia Pieta in a period during which he deputised for the ill musical director. These hospital/ orphanages at times sheltered as many as 6000 children in Venice, and for religious as well as educational reasons choral singing was given an important place in the syllabus.

Opera occupied a large part of Vivaldi's time and it was a relatively new and exciting form of musical expression. It was through this that Vivaldi met Anna Giraud...the opera singer. He met Anna in Mantua whilst he was in the service of "The Exceedingly God-fearing Prince of Darmstadt". He instructed her in singing and dramatic performance, starting her off on a career as an operatic singer. From 1726 on she was constantly singing leading roles in Viv's operas and her sister Paula became his nurse. Both accompanied him on his travels and lived in his house in Venice, giving rise to another reproach from the church concerning his "Amicizia" with Anna (Called in Venice L'amica del prete Ross' - Friend of the Red-Haired Priest). The relationship may well have been purely platonic as a travel journal says of the girls in the Pieta, and probably referring to Vivaldi; "They have a Eunuch for their master and he composes their music..." This connection with Anna and Viv's truancy from saying Mass resulted in him being called before the Papal Nuncio and being forbidden to be artistically active in Ferrara - quite a blow to his already meagre bank balance.

In conclusion, Viv's relationship with the singer Giraud and his neglect of his priestly duties must be viewed from this distance with a large degree of charity, especially as we have no great insight into his circumstances or even the working of the society in which he lived. What can be said with certainty is that his sacred works hold equal ground with his instrumental and operatic works. He may have had some strange theological ideas, but musically Vivaldi considered only the best good enough to glorify God.

VIVALDI'S LIFE
An Italian composer/violinist, Vivaldi studied under his father and possibly Legrenzi (Director of music at San Marco). He was nicknamed 'The Red-Haired Priest'. At the age of 15 he began training for the priesthood and this extended for 10 years 1693-1703, not at a seminary but probably under the oversight of a local priest. Shortly after becoming a priest in 1703 he ceased to say mass due to a chest ailment which did not affect his musical career. (He never had to put down his violin due to a seizure). In the same year that he became a priest he started to be associated with the female orphanage "Ospedale Delia Pieta" in Venice. His opus 1 Trio sonatas were published in 1705, the Op 2 Violin sonatas in 1709.

Vivaldi claimed to have written almost 100 operas, the first being Ottone in Villa (1713) and 46 have so far been traced. Between 1713 and 1738 there was hardly one year that passed without at least one (sometimes three or four) new operas being performed. During the years c.1718 to 1721 Vivaldi was in the service of Prince Philip of Hesse-Darmstadt where he met Anna Giraud. a singer who was to take the leading roles in many of Vivaldi's operas. Anna and her sister became the composer's companions. In 1723 to 1724 he visited Rome and on one occasion played before the Pope.

Around the 1720's, amongst Vivaldi's works were the Op 8 concierti including the "Four Seasons" but in 1737 the church authorities banned him from mounting operas in Ferrara due to his association with Anna Giraud. The following year, the Pieta directors refused to renew his contract. Towards the end of 1740 Vivaldi left Italy and travelled to Vienna where he died in poverty. He was buried in a pauper's grave on 28th July 1941 as a 'Secular Priest' in a plot attached to St Stephen's.

A very Good article on Vivaldi, especially the part where the composers believed God should have only the best music to glorify Him. His operatic works require virtuoso voice control.