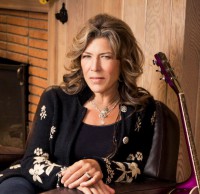 Ashley Cleveland spoke about her 10th album "'One More Song' which was released on 2nd February 2018. The Grammy-winning singer told The Country Note website, "For me, every album happens because of the songs. They are always driven by the songs. I had a memoir come out in 2013 which really opened up a whole new set of opportunities for me. It involved the music and it expanded my world. I felt that the songs deserved to have a form and they deserved to be heard. I write about the things that I know. I'm not a fiction writer. All of the songs are very autobiographical. I like to let the music dictate."

And dictate they do. The title track is based on a story told to Cleveland by her mother about her older sister Betsy on a trip back to the Smoky Mountains to see their old cabin for the last time. Cleveland knew it would become a song saying, "I decided to call the record 'One More Song' because I had not planned on making another record. So it came as a surprise and a gift." She laughed, "It's my way of saying, after a long career - 'PS - here's something worth listening to.'"

Plenty of people have listened to Ashley's music down the years. She is the first woman to ever be nominated for a Grammy in the Best Rock Gospel Album category and the only woman to ever win the award three times. Now 'One More Song', produced by her producer, guitarist and renowned session musician husband Kenny Greenburg, is, in the words of one reviewer, "steeped in the soulful sounds of the blues and lyrical richness of Americana that highlight the powerful, far ranging and motion-filled vocals Cleveland is so well known for all over the world."

One of the many powerful songs on the project is "Lily Grown Wild", written about her youngest daughter Lily with beautiful imagery about her children becoming adults and the universal struggle of learning to let go. Her self-penned "Way Out Of No Way" is a feisty blues-tinged song about her youthful discovery of personal purpose, the journey she travelled to eventually reach the other side of addiction and find her life while her songs of faith like "Ezekiel 2" and a rootsy medley of the traditional gospel evergreens "Take Me To The Water" and "Cool Down By The Banks Of Jordan" demonstrate Ashley has lost none of winning ways with gospel blues.

Ashley remains a hard-working music biz phenomenon. The Tennessee native has contributed background vocals to over 300 records outside of her own. On 31st March and 1st April she will be a major contributor to the theatrical concert The Cash Legacy: A Tribute To The Man In Black together with Mike Farris and Mandy Barnett at Nashville's Ryman Auditorium; and she is currently working on two new books and documentary Who's The Girl which is currently being pitched to film festivals. Said Ashley, "Some of the songs on this record show up in the film."

Speaking about her many years in music Ashley said, "What has galvanised my career and kept it alive are my fans. The greatest thing you can hope for is for the artists and the fans to make emotional connections with each other through the music."