Avalon: The US pop harmony group talk about their ministry 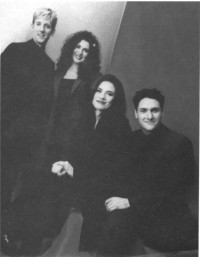 Mike: With a 'Greatest Hits' package, it's an ideal point to take stock. How do you think the ministry of Avalon has changed over the years?

(Janna Long) I think our ministry now is more vertical. We've had records in the past where we've had songs that could easily have made mainstream radio just because they "could" be about God at some point, or you "could" be thinking about a relationship with another person. With this record, we really wanted the focus to be very clear that definitely, this is Christian music. This is something that we want to make very plain to everyone. We're speaking about God and our relationship with him, whether that be a "questioning" relationship with him, where we have questions for him when we don't have all the answers, or whether we're praising him, or just pondering, or rejoicing.

Mike: When you look back, what memories stand out?

(Jody McBrayer) I think humanly speaking, obviously the opportunities that we've had to go to the Grammies and being nominated for those and then actually winning an American Music Award this past year. Those things for us were like a dream come true. We all grew up watching the Grammies on television and the American Music Awards and thinking, "Oooh, one day wouldn't it be great to even go much less be a nominee?!" and then to win was just far beyond any expectations. So humanly speaking, that was just tremendous for us.

Mike: Melissa Green, you're the new member of the band. What's it been like joining a successful group?

(Melissa Green) They've been very nice! It was hard learning all the songs in the first place, to be able to do the concert! But everything has been wonderful. I think it's a challenge to walk into the group at this point just because they've been so established and have been producing music with excellence for all these years. Was I a fan? Yes, since the beginning but singing to their songs on the radio then is so different to doing it in a concert because the background vocals are so intricate. You don't realise that. So coming into it, I thought it would be a little easier because I did knew some of the songs but it really wasn't!

Mike: Avalon has been going for seven years now. How can you measure whether to continue or not? What criteria would you use to determine whether God still wants you to do it?

(Michael Passons) I think each of us have our own desires and if the Lord gives us his will, our corporate desires. We just follow our hearts asking, "Is this ministry still valid? Are we still committed to it personally from a career standpoint and a spiritual standpoint?" I think just praying about things like that obviously will help to continue to guide us in the right direction.

For more on Avalon visit the Avalon artist profile