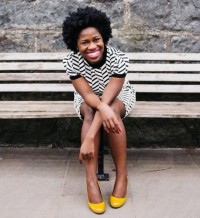 The fact that Bee Bakare was recently crowned a winner of Future Music's national songwriting contest will be of no surprise to those who have already heard the soulful-voiced singer's 'Bee Bakare' EP and her delicious single "Waiting To Happen". And as well as her considerable songwriting talent Bee has an exceptional voice which Cross Rhythms noted as far back as June 2013 when, while reviewing the 'Wildfire' album by Bath City Church, we noted "the team have in Busayo Bakare a singer whose husky, warmly expressive contralto is one of the best heard on a UK project for many a day." Now with an EP 'Brighter' set for release on 26th April things are clearly on the up for the hard gigging young soul singer.

We began our chat by talking about the theme of "Waiting To Happen". Bee explained, "It's about love, it's about wanting love and it's also about, I guess, temptation." She continued, "At the time of writing it, it was kind of, to be completely open, I had a crush on somebody and no, our hearts did not literally collide but I guess in some way they did, on account of the crush. But it was a kind of a crush I didn't want to have. Basically the person I had a crush on reminded me of somebody that I'd seen before and I didn't really want to go down that road again."

Bee's faith has a strong effect on her songwriting. "My Christian faith is a big part of who I am as a person. It's a big part of how I think, it's a big part of how my heart is and that always comes through in my writing. I guess the part of it mainly is that I always just want to portray joy in the songs that I write. If it's not specifically the emotion of joy, it's something that people feel like they can relate to and they feel like they're not alone, in whatever it is. So for example, on my EP there is a song that I wrote after I unfortunately crashed my car some time ago. It was literally after one of the worst weeks of my life when this car crash happened and it just felt like the end of the world. And I wrote this song, it's called 'Best Shots' and it's basically a survival song, it was like my moment of saying 'You know what, despite all this, I'm not going to let any of it get to me. I'm just going to push past it - nothing can bring me down.' It says, 'Give me your best shot, give me your best shot, I won't break, you won't see me fall.'"

I asked Bee what kind of singer she would call herself. She responded, "I feel like I relate more with soul rather than R&B, more because of the content of my lyrics and I guess in sorts the production as well. More kind of like a pop-soul vibe I would say than R&B. But you know one of the things that is important to me about my music is that I always want to include everyone. I love gospel music - absolutely love gospel music, but I always wanted to write music that could be inclusive of everyone. So that's part of the ethos behind my music." 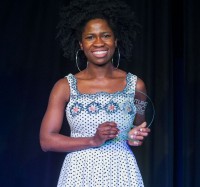 Bee is no longer a member of Bath City Church. "I moved from Bath just over a year ago and right up until then I was a member but to be honest, I'm still kind of, I still feel like a member because it's quite a big church and because I've been going there many years, I've got relationships and friendships and really family there that are still a part of my life. I visit quite frequently as well and I'm involved in a ministry that came out of Bath City Church. So I'm still very connected but not actively going. Now I go to Holy Trinity Brompton in London."

How does the singer/songwriter deal with the temptations and testings that are part and parcel of the mainstream showbiz world? "I'm not really or have ever really been a party animal as such, so it's not that hard for me to turn it down. But I think it's okay to have fun. My parents brought me up with Christian values which have always been a huge part of who I am so their voice is always in the back of my mind, with wisdom. The thing is also I have really, really good wise friends that are constantly watching my back and always there to give me advice. So, I think for me I don't necessarily struggle with it as much as maybe some people do, but I am constantly having to negotiate and battle in my mind, and constantly facing decisions like that because of the places that I play, which most of the time are club music venues. It's important I think to know who you are before you step into it, which has been quite helpful for me because I've always had those friends around me to guide me before I thrust myself into the full gigging scene."

Bee spoke about her 'Brighter' EP. "It was recorded in two places in London, one was a home studio, one was a more established studio. The song 'Brighter' is definitely a kind of happy, upbeat number. The first line of the song says, 'You shine like the sun on an English summer.' I don't know if many people actually notice those lyrics but I particularly enjoy them because it relates to the English summer and how we never really have a proper summer. But essentially, part of the reason I put that in there was because I really wanted it to feel like a summer sunshine happy song that people wanted to wake up in the morning to, listen to, make them smile whilst they get on their way to work or whatever else they do. And also, just to add, that song's writer won one of the awards at the recent Future Music Song Writing 2016 competition, which is really exciting. So it's now an award-wining song, which is amazing."

Unlike some artists who perform in Britain's R&B and dance music clubs Bee does no miming. "I sing and play guitar myself. I really enjoy accompanying myself. I also have a band, a four/five-piece band that I play with. I'm very much a singer/songwriter and I think part of embodying that is demonstrating that with your own instrument. That goes for recording is well. I play guitar on my EPs. I am eager to see 'Brighter' released. I've already been playing some of the songs on this EP and people kept asking me where they were, and I was like 'They're not out yet!' I'm really glad they are finally being released."