Beki Hemingway: A song-by-song rundown of her 'Whins & Weather' album 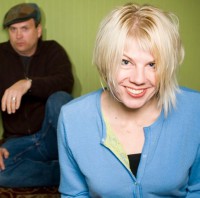 The songs on 'Whins & Weather' seem to pull from a lot of styles of music that my husband Randy and I like, Americana, gospel, folk, even some of the moodier, alternative rock that I grew up on. It's maybe more acoustic than anything we've ever put out but we just tried to take each song and do what was appropriate with the arrangement and instrumentation. A lot of it was recorded at home and over the internet. For the final production touches though, we did go into Camden Studios in Dublin where we worked with Connor Brady to finish there. We've sort of learned after 21 years of working together musically as a married couple we need that third set of ears to be that tie breaker and tell us when we're done. So, we sort of joke, we always need a producer or a marriage councillor. We find it's actually cheaper to pay for the producer.

Once the album was released we got asked about its title. It gets its title from the whin bushes that bloom in these gorgeous yellow flowers in the spring time that look so beautiful. But underneath there's this deadly sharp prickliness that would just draw blood. We sort of liked the concept of the dual nature of this bush, just like summer and winter weather being opposite but being part of the same cycle. I suppose the songs are about transition, perseverance and trust. I feel like I'm learning not to be so thrown by circumstances but instead just to find joy in where I am. I hope that comes through.

Recording the final tracks and mixing at Camden Studios was a great experience, if not a bit surreal on a few levels. By the end of the process, I was in radiation for breast cancer treatment, so I was staying in Dublin at the hospital lodge. My day would start with radiation, then a bus ride to the recording studio where we'd mix for hours and then I'd go back to the lodge and start again the next day. It was actually a fantastic distraction to be busy with music work.

Working with Conor (Brady, the guitarist of the Commitments and co-producer of 'Whins & Weather') was a great fit. My only regret is that we didn't get him to play guitar on something. Next CD. . .

"Two More Hills"
If this CD has a theme song, I think this is it. About a year ago Randy and I went on a bank holiday weekend with the Irish Christian Hillwalking Club. We had been writing songs in solitude by the Irish sea for about six weeks and wanted to meet some new people, but completely underestimated the seriousness of these hillwalkers and the probability that an old ankle injury of Randy's would recur. It was a recipe for a long, long day on the hills. At the end of it, when the swelling went down, we did get to make some new friends and Randy had the inspiration for this song. It makes the point that in life, as in hillwalking, when we feel overcommitted and overwhelmed, we simply need to take one step at a time and follow the leader. We will get there yet.

"My World Is Out There"
Two years ago we decided to take a leap - sell the house, quit our jobs and just say 'yes' to music making for as long as we could. Everything fell into three categories and they were music, travel and service. Prior to that we were living these normal lives in Denver, Colorado, which is where I'm from, with a house and a dog and really very little hope that we'd ever be returning to music in any serious kind of way. My best friend and prayer partner, Kathy, held my hand through all the confusion that kind of led to these changes, so it means a lot to me that when I got stuck in the middle of writing "My World Is Out There" she helped me to finish it. It was written before we had any plans to take that leap, but in some ways, I kind of think of this song as the beginning of the adventure.

"Is This All"
This is one of those songs that just came out of thin air. Randy was playing by the fireplace on a cold day and I was humming along. I suppose we all hit points where we feel like we could break. God knows our breaking point, though, and the Lord is constantly stretching us so we will grow. It's a well-worn process, but I never quite get used to it.

"Anyone But You"
After 26 years of marriage, Randy and I write a break up song just for fun every now and again. I particularly like Kenny Hutson's guitar work on this.

"Not Excused"
Growing up in my family, we had to ask to be excused from the dinner table. I guess that's where that line comes from, but I thought it'd be interesting to explore the idea of simply not leaving. It's also fun to have a song that is primarily piano and voice. There are so many love and breakup songs (and true stories) about kicking someone out or taking off in anger or shame. But I wanted to write about acknowledging a mess and the stubbornness of staying around to work on it.

"You Sing This Song"
This is a quirky song about asking others to step in when we aren't ourselves healthy. When we had almost finished with the recording, I walked in the studio one day and Randy said, "This needs a glockenspiel," and I thought, "Who says that?" and "Who has a glockenspiel?" But sure enough, the next day our friend Jeff Elbel, who owns a glockenspiel, had sent us the track from Illinois, and now it might be my favourite part.

"Thank You For The Rain"
With "Thank You For The Rain" we had just arrived in Ireland and people were always asking us 'How do you like the weather?' It's beautiful here of course, but you can't get all that green grass without some grey skies and constant rain showers. It struck me like a metaphor for life, taking the ups and downs with gratitude, because in the end they all work together to create something beautiful. We released a version of this one early on as a pay-what-you-want single to help with some medical expenses when I was diagnosed with cancer. For the album we added some keyboards and changed the backup vocals a little bit. I think the album version is a bit fuller and I'm really happy with how it turned out.

"The Shape You Left Me In"
I spent January to June confronting a breast cancer diagnosis so of course there has to be a song about being poked and prodded and given a myriad of well-meaning advice from all sides. I wound up feeling a bit pushed around by the experience at times, so this song was my therapy.

"Because"
A little song about unconditional love.

"Tourist"
Last October we visited the Auschwitz-Birkenau concentration camp museum. We were expecting to be really emotional, but instead found ourselves confused and almost numbed in the face of so much information being given in such a short amount of time. It was kind of a shock I guess and what struck me most in the moment was the juxtaposition of this terrible history, which should never be forgotten, and seeing it run like a tourist attraction. It's disturbing on a few levels. When we got back home, the tears came then. A few days later Randy sat down with his guitar and we started writing "Tourist". We wanted to create a sombre mood that fit the subject matter, so we were really fortunate to have Tim Cotteral's strings and Duke Special's vocals and piano on the recording.