Beki Hemingway: From a Larry Norman video to giving thanks for the rain 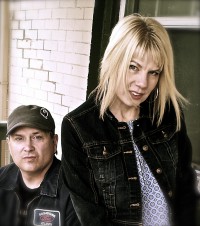 Reviewing and subsequently interviewing artists never ceases to throw up surprises. In the case of Beki Hemingway the surprises have been going on for years. They started in 2005 when I finally got to hear Beki's exceptional independent album 'Words For Loss For Words'. I say eventually as the album had actually been released three years earlier. I was stunned at just how good it was. I wrote how the "American singer/songwriter has the rare ability to live the lines she sings, so one moment she sounds battered and bruised, the next suffused with a transcendent hope." I enthused about the grunge-tinged rock of "Hope Is All I Have" and the ambient-come-country sound of the closer "Floating Away" and concluded my review, "Beki is a huge talent, some record company somewhere needs to show this undeniable fact to CD consumers."

In truth I wasn't surprised that in subsequent years no record label picked up Beki's transparent talents - record companies so often overlook the brilliant in favour of the merely average. But I was flabbergasted when I suddenly learned that Beki was to play a house concert, not in Chicago or Denver but in Stourbridge, West Midlands. So to catch Beki in concert performing to the small gathering alongside Celtic/Americana maestros The Sweet Sorrows my wife and I found our way to the house in question. The show was marvellous and with accompaniment provided solely by her gifted husband Randy Kerkman, that stunning voice and deftly crafted songs of life, love and loss transfixed everyone in the room.

Before the house concert I sat down with Beki to get her story. And once again I found myself enveloped in amazement, for in response to a routine question to document this "American singer/songwriter" I discovered that Beki wasn't actually born in the USA but in Plymouth, Devon, in the very building (Freedom Fields Hospital) where I, years before, had taken my first breath. Beki explained how an American songsmith came to be born in Devonshire. "My father was over on an exchange with the military. I didn't stay long in Plymouth because my parents moved back when I was nine months old. I grew up mainly in Colorado after my father retired from the military. My parents built a log cabin in the mountains in Colorado, and that's really where I grew up. I have two younger brothers and an older sister. Our nearest neighbours were about a mile away."

There was a lot of music from some pretty diverse sources in the Hemingway household. "My mother was really into things like The Mormon Tabernacle Choir and choral music, but my father was kind of a folky. He was this weird mix of military and Bob Dylan, Joan Baez. I grew up with this kind of music playing in the house. He liked to adopt musicians so there were people who lived with us. This one musician lived with us for a year after his divorce when I was six, and he wasn't that typical, 'Oh, you're so cute - you sing.' He would say, "You're sharp. Do that again." You wanna go, 'I'm six, I'm adorable,' but it was more like, 'OK, teach me.' I do think that was an influence, the way that my dad liked to surround himself with artists and musicians."

Beki's father was a strong Christian and so was Beki. When Beki was 16 she had a chance to go to Australia as an exchange student. Beki said, "While I was in Australia my dad, through a chaplain buddy who had retired from the military and was, I believe, pastoring a church, was put in contact with the manager of Larry Norman."

As all followers of Christian music had come to realise, Larry was the creative foundation stone of what was developing into contemporary Christian music. His seminal albums like 'Upon This Rock' and 'Only Visiting This Planet' inspired countless young Christians to embrace popular culture rather than retreat from it. Beki continued her story, "The first meeting I had with Larry was when they took my dad up on an invitation to come visit us at the camp my father managed and at our home, which would have been when I was about 17. Larry and I got along. I wanted to be a singer. The family kind of stayed in touch, and by the time I was 18 and a freshman in college, when Larry came to Denver to do a video, they needed cheap labour and they called me. So I sang on the 'Home At Last' video, my first paying singing job."

Beki studied music at Colorado Christian. "I did a year, and I left because I couldn't afford it. I joined a local band in Denver and would fly out to sing with Larry when he had shows in the States. It was an original band, but probably a band of Christians more than a Christian band. We were called Otto Bootzman and we played the bars in Denver. Our material was not Christian and the people in the band were still figuring out their faith. I was using my sister's ID to sing. We made a cassette. A couple of the Christian 'zines at the time reviewed it - Cutting Edge, True Tunes, whatever."

While she was singing with Larry she met a talented Christian guitarist and keyboard player, Randy Kerkman. Randy was born and raised outside of Chicago and had played in the band In 3D, then the band Mission of Mercy which morphed into the band Yonderboy. Beki and Randy fell in love and married in 1991. Explained Beki, "He was in Chicago, I was in Denver. My band in Denver, Otto Bootzman, broke up. Mission Of Mercy/Yonderboy was going strong, so I moved to Illinois and got in with the True Tunes crowd. I worked for True Tunes and I joined This Train. They put out a few [releases]; I'm on the first one and the demos leading up to it."

This Train were a band that one critic described as "a hybrid of The Stray Cats and Barenaked Ladies" and certainly their quirky mix of rockabilly, pop punk and much else was an intriguing sound. Their debut album 'You're Soaking In it' for Etcetera Records contained one song, "Mary Alice", written and sung by Beki which described a child's fear for her parents' marriage after the marriage of a playmate's parents ended in divorce. Despite the quality of that song and those written by This Train's other singer Mark Robertson and a raucous rock remake of Amy Grant's "Baby, Baby", 'You're Soaking In It' didn't sell and was it was two years before This Train's 'Mimes Of The Old West' was released on Organic Records which produced an unexpected Christian radio hit with "A Million Miles Ago". And by then Beki had left the band. Explained Beki, "After the first This Train album Rich Mullins hired everybody in the band except me. They were constantly on the road with Rich, so I thought, 'If I want to work, I probably have to start writing my own songs and doing my own thing.' That's about the same time Yonderboy broke up; Randy and I had our fifth anniversary and I thought, 'We might not kill each other if we work together. We'll try it.' That was probably '96 we decided we'll work together, and we haven't killed each other yet."

In 1997 Beki released her first solo project. Showcase magazine wrote, "A powerhouse vocalist and promising writer, Hemingway (yes, it's her real name, and she is related to Ernest) has released her first solo CD, a six-song EP entitled 'Rinse.Repeat.' As a solo artist, she's a welcome new addition on the Midwestern musical map. Beki Hemingway avoids the moody, hypersensitive musical and lyrical void that so many young singer/songwriters succumb to. 'Rinse.Repeat.' is a visceral, confident project, and it rocks on purpose. These six songs are all written by Hemingway, or co-authored with her husband, Randy Kerkman. Like other musical couples Sam Phillips and T-Bone Burnett, Susanne Vega and Mitchell Froom, and Julie and Buddy Miller, the husband provides the instrumental and technical foundation for the wife's featured performance.

"Kerkman's rock and roll instincts and tasteful guitar playing and arrangements are key to Hemingway's sincere, rootsy songs. 'I'm trying to tell a story,' Kerkman says of his input to their music. 'I'll take an experience and try to put myself in that position, and through the song, put everyone else in that position, too.' Hemingway and Kerkman complement each other ideally, and their recent musical collaboration has enabled Hemingway to grow as a writer." 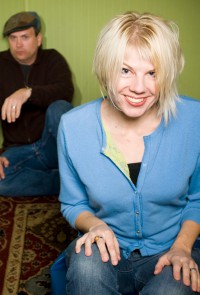 It was to be three years before the Hemingway/Kerkman partnership were able to put a full length album together. Randy explained how the album 'Too Much Plenty' got its title. "It stems from a friend of ours whose grandfather was Finnish, and he used to say, '"Too much plenty no good,'" which means, 'everything in moderation.'"

It was favourably reviewed by Phantom Tollbooth: "'Too Much Plenty' is a good, old-fashioned rock 'n' roll album, with lots of electric guitar, prominent drums and Hemingway's signature power alto on every track. As Huey Lewis would say, 'The heart of rock 'n' roll is still beating,' and this CD is proof. From a lyrical standpoint, there are several songs dealing with a child's point of view, including 'Make You Proud', in which Hemingway takes every child's view of wanting to please the grownups in her life. This Train fans will be happy to see 'Mary Alice', which talks about a child's fear of parents fighting, on this collection. The delightful 'Fort Bragg' reveals that Beki was that kid (didn't we all know a kid like this?) who always had the whole neighbourhood at her house: 'Everybody's playing in my yard/Everybody's playing in my yard/Everybody knows that my yard is the place/to play, my mom makes the best Kool Aid/Everybody's playing in my yard/Look at me, I'm popular.'

I saw Beki and Randy in Chicago.
Wow, what a great performance!!!
My buddy Dan introduced me to them

Just saw Beki and Randy play tonight. Once again, they rocked the backyard. Rather a miracle lyricist, you are, Beki!! So gifted. But, really in half a year, and you come out with a new deeply riviting album?? Who does that?! So, I came to upload a couple of videos and spied this Crossrhythms interview/review. WOW. Nice job.