Beyond: A British Band With Colorado Connections

Tony Cummings charts the intriguing history of the band BEYOND and Ballymena's 12tribe Records. 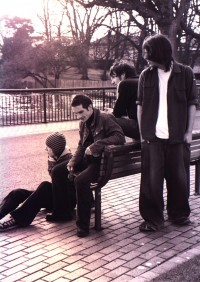 More than one person has observed that starting a UK-based independent Christian record label is like applying for a licence to lose money. Yet one brave new record label has recently emerged in Ballymena, Northern Ireland. Judging from the positive response given to 12tribe's first two releases, 'The Anselm' by ambient acoustic rock team The Anselm and 'The World Means You To God' by an indie rock band with a soft, melodic approach, Beyond, the company are on the scene for the long haul. 12tribe Records is managed by David 'Davy' Paul who is also the vocalist/guitarist with Beyond. I asked Davy and the other band members to give me the lowdown. Davy began the Beyond Chronicles.

"The first demo of the album 'The World Means You To God' was recorded in Langbank, Scotland, in 2002. Pete McFarlane had heard me playing some songs at a Christian Youth Camp in Northern Ireland and suggested I record them in Scotland. I hastily gathered musical support for the project, with me playing rhythm and singing lead vocals, Pete on bass, Stevie Ross adding the necessary drums and Robin Gault who was inspirational on lead guitar. Lewis Gault, later to become the band's drummer, at this stage was engineering and producing the tracks. The disarray of talent that crammed into a little side-garage studio gathered in one purpose only: to produce something from their lives for God. Lewis would make his, as is now customary, transition from behind the mixing desk to drum-stool, and back again, then over, and back again.

"I remember our excitement as we'd rush from Lewis' garage (tracks already blasting in the car) to Stevie's house each night after that day's recording. We'd meet up with the American Teen Challengers staying at Stevie's to let them hear what we'd been arranging in the studio that day, sitting in his kitchen, listening to the tracks, watching the faces, trying to gauge what people thought. The support we received was tremendous even if, in hindsight, our first efforts weren't. But that's all relevant to where we were as a band in terms of our development. We'd just begun our journey."

In late 2003 Beyond found themselves in what some might have considered troubled waters. First bassist Pete McFarlane, heavily involved with another band, seemed to have lost his focus for Beyond and the group agreed they would need a replacement. Then Rob Gault re-located from Ireland to live in the USA. Davy commented, "The demise of the band, that many had anticipated, never materialised. We had accepted that change was part of time and time changes. But God doesn't. If we were focused on God, no obstacles would stop our endeavours for him. The band was definitely going through a prayerful transition, one that came from an express sense of higher purpose and responsibility, to our audience and in the tasks we'd been given by God."

In July 2004 Pete was back in the studio with Beyond "laying down bass on the bones of the album." But he was still not officially back in the group. A bass playing friend of David's, Andy Magee, temporarily joined Beyond to play gigs. One of those concerts was at The Turnhalle, Auraria Campus at the University of Colorado.

The recording of 'The World Means You To God' continued to evolve. Some songs were dropped and others, like "Won't Leave Me Lonely", completely overhauled. Things were finally taking shape with Pete McFarlane re-committing as an official band member. Commented drummer Lewis Gault, "To have Pete back in the band was just immense. We can't thank Andy enough for the time he gave to us all, in giving of himself to God. His dedication in bridging that gap whilst Pete was missing was invaluable and special to us. By the time we came into the studio in June this year it felt that there was more maturity in our approach to our music. The feeling was one of defined purpose and unity."

Like lead guitarist Rob Gault, Pete McFarlane will soon be relocating to the USA. Lead singer Davy feels the logistical disadvantage of having two band members in another country is offset by recording/rehearsal advantages. He explained, "Rob now lives in Denver, Colorado where he manages Rockhouse Studios Inc, a band rehearsal facility in Englewood, Colorado. Having a label affiliation to this state-of-the-art complex Stateside is obviously a great association to have, as it affords the band both a rehearsal and recording facility when playing in the US.
The band is planning a series of gigs in Colorado before the end of 2006."

Beyond are already planning album number two and have recorded the bones of it, to be called 'Based On A True Story'. There are also plans afoot for a possible "unplugged" album and to put some unreleased tracks as free downloads on the band's website. One thing seems certain. There's a lot more to come from both Beyond and 12tribe Records.