Blessed By A Broken Heart: The mainstream band from Montreal

Blessed By A Broken Heart

One of the stranger phenomena of Christian involvement in music is the obscuration of the term "Christian band". Ever since Christian rock bands first decided they would rather play clubs and stadia rather than church halls and Christian fests there have been a stream of bands working in the mainstream who've insisted in interviews that they are "not a Christian band". Such a statement can have one of two meanings. It can mean that none of the band members are Christians. But thanks in part to the pressure of misguided managers and publicists who see rock musicians with Christian faith as the kiss of death in efforts to achieve mass appeal more often "we're not a Christian band" means "we are believers but we don't often sing about our faith and if we do it's in metaphor".

Canada's post-hardcore-cum-glam-metal band Blessed By A Broken Heart have built up a sizeable following since their formation in 2003 and their latest album 'Feel The Power' on Tooth & Nail Records is described by vocalist Tony Bambino as "sheer metal perfection". In 2010 HM magazine asked Gambino about the whole "Christian band" label. He responded, "Well, we have tried our hardest not to market ourselves as a Christian band, simply because it will limit the amount of people you reach with your music. We want everyone to listen to us, Christians, Buddhists and Satanists, anyone who loves music. We have a good message and that message is for everyone. We just happen to deliver that message with sweet rock music."

Tony continued, "I love being able to influence so many people and cultures around the world. I honestly didn't think I would have the opportunity to do such a thing. It's a huge blessing. It's rad when you see 50 year old metal dudes rocking out to us just as hard as the 17 year old hardcore kid."

The band were formed in 2003 by bassist Tyler Hoare in Montreal, Quebec. Tyler was asked by MetalUnderground.com where the band's strange name came from. "It's a very long story, but basically the first singer of this band stole my girl that I had been with for six years and was gonna marry. They got engaged a month later, I thought my life was over, and when I realised that there was more to life than just her, it opened my eyes and I was blessed through this broken heart. Plus, in like 2002 it was cool for hardcore bands to have long emo names. We've tried to change it since then because obviously the name doesn't really fit the music anymore, but the fans and labels are very against it."

The band's first album 'All Is Fair In Love And War' was released by Blood & Ink Record in 2004. It was a metalcore item. Within months they were beginning to shed band members and in 2005 recruited a shred-style guitarist Sean Maier. Blessed were moving towards a more hair metal sound and the following year toured the UK on a sold out headlining tour with Enter Shikari. In January 2007, after the addition of vocalist Tony Gambino, they signed with Century Media Records who sent them into the recording studio. The band spent April at The Farm in Vancouver, British Columbia, with producer GGGarth Richardson and engineer Ben Kaplan, recording what would become the band's 'Pedal To The Metal' album. Many critics thought the album resembled the work of Motley Crew. Tyler once quipped that "we have the same tour bus that they do. Slater's also working on a rotating drum kit."

Particularly impressive on 'Pedal To The Metal' was Sean Maier's superfast guitar work. Sean told moshcam.com, "On that album many of the basic song structures and a few of the whole songs were written by Frank [the band's original drummer Frank Shooflar] before I even joined in '05. I helped write some of the more '80s style riffs, put my touch on all the guitar parts and of course all the solos!"

A headline tour of Europe was arranged to promote 'Pedal To The Metal' after which drummer Frank Shooflar left the band to pursue his career as record producer and songwriter. He was replace behind the drum kit by Slater. In May 2009 the band toured Japan with Maximum The Hormone and Bring Me The Horizon. Drummer Slater thinks a show in Japan was Blessed By A Broken Heart's best show to date. He told ChristianMusicZine, "The best show to date for Blessed was in Tokyo, Japan. We played the Loud Park festival in 2009. We got to share the stage with bands like Dokken, Judas Priest, Slayer, Anthrax and Megadeth. There were over 20 thousand screaming Japanese ninjas in attendance. The energy of the place was out of this world. We always love going to Japan because we're huge there. . . Now we just gotta make that happen everywhere else."

A headlining tour of Australia was followed in the summer of 2010 with Blessed taking part in the Scream The prayer tour of the US with outfits like Maylene & The Sons Of Disaster and A Plea For Purging. Also in 2010 keyboard player Rex Krueger left the band. The following year Blessed signed with Seattle's famed Tooth & Nail Records. Said Tony Gambino, "Tooth & Nail and Blessed teaming up was just the right thing to do. They have been a very successful independent label and we have been a very successful band who have basically been DIY from the start. So between them and us, stuff gets done because everyone has a great work ethic and attitude. Most bands are disconnected with their labels, but that's not the case with us and Tooth. We're all on the same page and the goal is to take over the world, one head bang at a time. They really believed in our sound and vision, so creative control wasn't an issue. A lot of people are speculating that we 'toned down the heavy sound' because they're roster doesn't match our sound and they wanted us to be a 'radio rock' band. . . but those speculations are wrong. We demoed out our entire record before even getting signed, and it's those demos that got us signed to T&N." 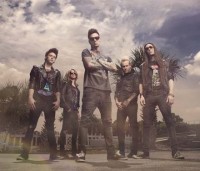 The band are "super stoked" with their Tooth & Nail debut 'Feel The Power'. Enthused Gambino, "We took three years to write 'FTP', so we had a lot of time to perfect the songs. Many songs were countlessly reworked and re-written before they were finished. Most bands rush the writing process and just pump out 10 songs, and breeze through the studio, and get back on the road. We wanted this record to be legendary. . .one that could go in the books as one of the 'all time greatest records'. And you can't rush greatness. . . 'P2TM' was more of a metalcore record with a hint of '80s influence. 'FTP' is just straight up rock'n'roll. The '80s influence shines through a little more and fans get a real taste of the past. The choruses are bigger and more infectious. The riffs are more technical and catchy. The drums are more power-beat-driven and pulse-raising. Whereas 'P2TM' had some dead tracks on it, 'Feel The Power' is a good time from beginning to end."

The band's rhythm man Sam Ryder had the final word. "Things are so busy right now with booking and finding the right tour, it's the only thing on our minds. We will be out literally as soon as possible. Once we're on the road, we won't go home for a while, that's for sure!"