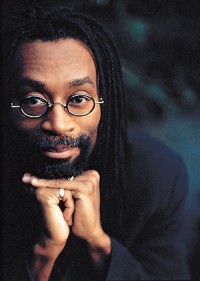 The announcement that the new album by Bobby McFerrin was to feature his favourite spirituals such as "Every Time I Feel The Spirit", "Swing Low Sweet Chariot" and "He's Got The Whole World In His Hands" surprised fans and critics alike. McFerrin might be a 10-time Grammy Award winner who down the years has sung with many of the greatest names in jazz but for Joe Public he will always be associated with one particular novelty hit. Just in case you can't recall what that was, the title "Don't Worry, Be Happy" will surely bring it all back. The huge hit featuring McFerrin's acappella vocal parts with all the sounds made by the so-clever vocalist is undoubtedly a Marmite-like song. Despite its million-selling success its association with right wing politics (it was used without permission as George H W Bush's official presidential campaign song) and its happy go lucky vibe make it a song which appears on some people's most hated lists. If that wasn't enough, Christians are uneasy about a song based on a saying by Indian mystic Meher Baba. But now believers are belatedly showing an interest in McFerrin's work thanks to the release by Sony Masterworks of the jazzy improvisational album 'Spirityouall'.

Christianity Today asked the 63 year old singer why it had taken him so long to record an album of spirituals. He responded, "It took me a long time to sing these songs because my father's voice was so strongly in my ear. I couldn't sing them until I could find my own way, my own voice. . . I wish my dad were alive to hear this album, and to see the way we're performing the songs live, letting them evolve every night. I don't know what he'd say. It's a very different approach. I could never sing these songs the way he did; he did that better than I ever could. His way is formal, very polished, very rehearsed, but still somehow manages to always feel immediate and personal. That's just not my way; we're very different singers. But we do have some things in common. My family went to church and talked about God often, but I never saw my father pray until I watched him sing the spirituals. Then I saw him pray. I think if my dad could come see me sing the spirituals, he'd see me praying too!"

McFerrin admitted that 'Spirityouall' was new musical territory for him. He said, "It shows a new range of influences like blues and rock and folk. And it speaks directly about faith. But it's part of an ongoing journey. Looking at familiar tunes or repeating motivic ideas every way round, revisiting riffs with just a slightly different spin or colour to open up a whole new meaning, these are always part of what I do, how I hear things. For me it's always been related to the visceral feeling of coming back to visit familiar rhythms and ideas, like the passages in the Bible I read again and again. Singing and reading the Bible are both part of my everyday life. So is walking my dog and driving and going to the grocery store. There are so many things in life we do again and again, but each time we have choices. The possibilities are endless."

McFerrin was asked to speak about his own faith. "For me all singing is praying, and I always hope to reach the audience on a spiritual level. That's not new. But spirituality is a very private thing for me. I enjoy going to church sometimes, but it's not the center of my relationship with God. I spend a lot of quiet time with God. I usually spend an hour or two each morning reading and praying. My favourite is the book of Psalms, a songbook, right there in the middle of the Bible. Sometimes the praying turns into singing; that's how the song '25:15' came about [on the new album].

"I've always tried to let each person in the audience take what they needed, what they were ready for, what was relevant to their own circumstance. I've always invited the audience to watch my journey into my own imagination and consider taking their own journey. I don't insist; I invite. I wanted them to go home and make up songs and be silly too. I realised the same could true for faith. Everybody has faith. Mine is grounded in Christianity, and a personal relationship with God. But I would hope that a Muslim or an atheist could listen to this album and feel moved. I think everyone can relate to searching for faith in times of struggle, feel the groove, revel in the joyful experience of being alive in the world. I wanted to find a way to talk about the spirit that would open doors within people and between people, that wouldn't close the door on anyone."

What did McFerrin make to the label "Christian musician"? "There are some amazing musicians who devote their lives to making music for worship. I admire them, and we have some things in common. My music comes from a place of prayer too. But I make music that lives in the everyday world. One of the things I learned from my dad is to thank God for whatever gifts you possess and to do your best to let those gifts do their work in the world. I think my gift is inclusion. I don't sing jazz and classical music and folk music and world music or vocal music and instrumental music or sacred music and secular music. I just sing music. All my influences are mixed up together in my ears and in my heart. It feels right for the music to inhabit a place of inclusion.

"So I don't think of myself as a jazz musician or a black musician or a Christian musician or an American musician or a serious musician or a silly musician. I'm just one person up there singing to a bunch of other people. Whoever they are, whatever language they speak, whatever their beliefs or concerns, we are in the moment together. I try to bring audiences into the feeling of joy and freedom I have when I sing. A feeling that our existence here on earth is pretty miraculous.
Many old spirituals were borne out of a place of pain and lament, and much of today's modern worship completely misses that. I think songs of lamentation are important, not just in church. Music helps people work through whatever they are feeling. The music takes us forward through time, a lot like life: we walk forward through whatever's before us, not knowing the outcome. Whatever difficulties we're going through, whether we need to grieve or struggle or accept or surrender, music helps. Music reminds us of the joy of being alive."

Amazing! I was born in the 80's but I really grew up listening to "Don't worry, Be happy" ...I must say thank you for the spot u continue to fill, allowing us feel music and the spirituality, soul and inclusion which I appreciate. Thank you! I wish to be on one of your concerts live.