Bethel Music's Bright Ones feature film has surprised many and this fictional drama of a bunch of students in a performing arts college seems certain to make a major impact. Tony Cummings spoke to three of the singers-turned-actors - Josie Buchanan (who played Claudia), Peyton Allen (who played Jay) and Chloe Elizabeth Vassallo (Mia) - from their Redding, California base.

Tony: How old are you guys?

Tony: Josie, can you remember the first time you heard the song "No Longer Slaves"? Did you immediately think, 'I'd love to sing a solo on that'? 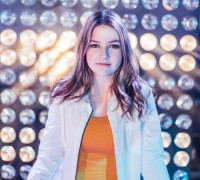 Josie: "I actually don't remember the first time hearing it. I'm pretty sure it was in church. I remember thinking that it was such a different song, but I didn't ever picture myself singing on an album. It's really cool that I get to do that. Now that I'm actually doing it, I love it so much."

Tony: Is that your favourite song in the movie?

Josie: "From the movie that's probably my favourite song, because of the moment it has with it, but on the album I'd say 'You're Gonna Be Okay' is my favourite one - or 'Let My Life' because it's so upbeat and fun to dance to."

Tony: Are you singing lead on many of the tracks on the 'Bethel Kids' album?

Josie: "Yeah. I sing lead on three on that album."

Tony: Has your voice changed a lot?

Josie: "Yes, it has but not as much as some of the others, but it has changed a bit. Listening back to that album is kind of funny because I sound so much younger. I've definitely gone down a key."

Tony: Peyton, how hard was it for you to act the part of Jay, conveying his insecurities and lack of belonging? Have you come from a fostered background?

I love all of the character,person who made this group.And also Frad Vesallo. Thanks to him!!!
My favorite is Peyton Allen.He is kind!!I want to know more about him....

My life is for God only.i always watch the bethel music kids and bright ones.I also want to join to them.So I Always watch them....I love all of the