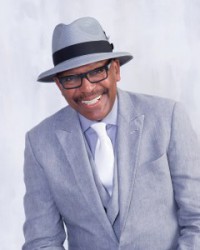 Ever since the 1960s when Andrae Crouch realised the huge potential in introducing R&B and funk rhythms into traditional African-American gospel music, there's been a continuing rise of gospel releases featuring a seriously funky groove. Currently, Cross Rhythms radio is playing the tracks "He's Coming Back" and "Passing Time" from the 'I Believe' album by Calvin Simon. Intriguingly, Calvin isn't a Kirk Franklin-influenced new kid on the block but a veteran singer, keyboard player and songwriter who has been inducted into the Rock 'n Roll Hall of Fame for his work as a one-time founding member of Parliament / Funkadelic who, as any funkster will tell you, in the '70s were one of the seminal acts who brought the propulsive rhythms of funk out of the ghetto and into the pop music mainstream. Clearly an interview with Calvin was necessary to talk about his decades-long involvement in music.

Calvin: "It was Welcome Baptist Church, in Beckley, West Virginia, when I first started as a kid. You know we always have a tendency to go back right where we started from and it gave me my basis for being into music. It's been quite an honour and quite a ride; I'm almost 61 years in the business."

Calvin: "Well, let's put it this way: I'm in the music business, I'm in the soul-saving business as well because I'm not what you would call a pastor but they call me a minister of music; I'm pastoring through my music."

Tony: Were you musical as a child?

Calvin: "I was about six years old when I first started singing in the choir at church."

Tony: So presumably your parents were solid churchgoers?

Calvin: "My whole family were churchgoing people; my grandmother especially was a praying grandmother. She indoctrinated that story of Jesus Christ in my life when I was a young kid and I tell you it was one of the greatest things that could have happened to me because she gave me the foundation that I needed to set me on the path that I needed to go."

Tony: I grew up listening to soul music in the '60s and during that era I came across hundreds of artists, many of whom I spoke to, who had started in the church, almost lived in the church, but once they moved into the world of R&B and showbiz, their faith fell away. In that era particularly that seemed to be happening all the time. How was it for you?

Calvin: "It's really amazing because when you think about it, I never left the church. The church has always been with me because I've always believed in God. Even when I strayed a little bit, I didn't stray too far. It's amazing how your faith will help you get through certain situations. I believe that we were all pre-programmed to do a certain thing at birth and it all depends on the intent that you have and the choices that you make along your journey. Once you make that choice, that's what's written into the Book of Life because then you have to own it because you are responsible for that decision."

Tony: I agree with you but I think of the lives of many R&B stars. The fact is they went with their decision to follow Christ for a season but once the women, the drugs, the loose living of R&B came in, it all got left behind. How did you personally continue on through that?

Calvin: "I personally kept through it because I realised that those were temporary situations. When you're growing up, you experience different things; some things you enjoy, some things you don't, some things you leave behind. But I've always believed in Jesus Christ cos I know he has brought me a mighty long way. To get through all those things I think he puts us in situations so that we would have a testimony, because if you haven't had an experience with Jesus Christ, then you don't really have anything to talk about. That's why my music to me is so personal because these things happened to me personally and I know now that there is someone that loves me more than I love myself."

Tony: Tell me about the very beginnings of the Parliaments. I understand that you were a doo-wop group out of Plainfield, New Jersey, and by the early '60s you'd become a five-man group consisting of George Clinton, Ray "Stingray" Davis, Clarence "Fuzzy" Haskins, Grady Thomas and yourself. The Parliaments had their first hit single in 1967 with '(I Wanna) Testify'. Were you singing on that?