Calvin: "That's an interesting story. That was in 1966. We had just started to record an LP for Revilot Records and one of the songs that we recorded was 'I Can Feel The Ice Melting'. They recorded '(I Wanna) Testify' but as they started to record that particular session I got drafted; I had to go to Vietnam. So I wasn't on that particular record but I was on the B-side, singing lead with George on 'I Can Feel The Ice Melting'."

Tony: Wow. You must have been hugely disappointed to get drafted at that time.

Calvin: "It was a very confusing time because politically there were so many things going on. There were a lot of things I didn't quite understand but I knew when I got drafted, anything that my name was involved in I've always thought about it as being honourable. My family had all served in the war so I figured it was my duty to go spend my two years and fulfil my duty. I had a choice: either go to Vietnam for two years or go to gaol for five. So once you do the math it's an easy decision."

Tony: But things weren't easy for you. You suffered from PTSD, didn't you?

Calvin: "I do; even to this day I'm 100% PTSD and that has been quite a chore, trying to keep the genie in the bottle. You have to deal with these demons in your head but by the power of God, he can do all things and make all your enemies your footstool."

Tony: When you came out of the army, what happened to the band then? Did you re-join it?

Calvin: "When I left, we had signed a contract with Revilot Records so I went and spent my two years and when I had fulfilled my military duty I was automatically going to come back and take my spot in the band, which I did."

Tony: There was a long gap, wasn't there, from the relative success of "(I Wanna) Testify" until the big record contracts? Did the band effectively break up for a period?

Calvin: "No, we did not. We stayed together. We just didn't have a hit record. We lived off '(I Wanna) Testify' as long as we could but then we created Funkadelic and we were recording under that because it was mandatory for us to continue to work and to eat."

Tony: How long were you gigging with them as Funkadelic?

Calvin: "From inception. I got home in '68 and I was with Parliament/Funkadelic until '79." 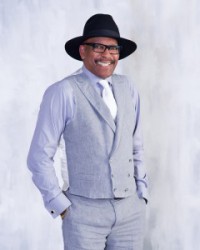 Tony: How was your relationship with George during all that time?

Calvin: "That's a personal situation. We've had our problems over the years but as a brother I love him. There are things that happen in families and you're always going to have that love even though you don't agree with some of the decisions that are made and the way you treat each other."

Tony: That's very diplomatic of you. I can understand your reluctance to say anything against George but at the same time it seemed to me that he always had the idea that it was 'his' band; he was the man leading it and everybody was subservient to him and his ideas. Is that a true observation?