Casting Crowns: Exhorting the Church to Come To The Well 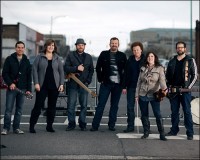 A great deal has happened to the world's best selling Christian ministry band since Cross Rhythms last reported on them in 2008. Then, Casting Crowns' 'Peace On Earth' Christmas album was about to be released. Since then the band have enjoyed further best sellers with 'Until The Whole World Hears' and, after a huge tour of the US, 'Until The Whole World Hears Live'. Now the seven-piece unit from Atlanta, Georgia fronted by one of the greatest songwriters of post war years, Mark Hall, have another album impacting the international Church. On 'Come To The Well' Hall collaborated on several of the tracks with top songwriters Steven Curtis Chapman, Matthew West and award-winning country songwriter Tom Douglas. America's Christian Retailing magazine spoke to Mark about 'Come To The Well' and the vision behind it.

"The theme behind the entire record is the song 'The Well'. It's written about the woman at the well and the fact that she was standing there talking to Jesus about water and Jesus was talking to her about water, but they weren't talking about the same water. . . I look at myself as a believer and I see that usually when I come to Jesus, I've already got my well figured out, I've already got what I think is going to sustain me, I just need him to sprinkle some magic Jesus dust on it and make it work. We have our wells figured and we want Jesus to fix our wells, but our wells are really holes in the ground. . . [Instead we need to] start with Jesus, then we go to the world. That's what this album is about."

One of the most uplifting songs on 'Come To The Well' is "Courageous". It is the theme song to the Courageous feature film from the producers of the Christian drama hit Fire Proof. How did Mark Hall get involved with the project? "I was about halfway through a six-week Bible study on Raising A Modern-Day Knight with about 24 of my [youth group] dads when I went to the National Day Of Prayer Breakfast in Washington and, walking in the door, [I] ran into [Courageous director] Alex Kendrick. . . I'd written half the song before we saw the movie."

Mark went on to speak about the song and the need to courageously take part in what God is doing in the world. "Have you ever noticed the way kids act out at a movie they've just watched? As soon as they walk out of a theatre, they pretend to be the movie's hero, even if it means imitating the super levitating karate kick they just saw. Here's the thing: deep down inside, grown men have the same feelings. What is it about us men that fires us up when we watch an action movie? Think about it. We just sat on our butts for two hours and stuffed our guts full of extra salty popcorn and a half-gallon of cola, but after the movie we're like, 'You want some of this?' We're ready to take on the world. We all have a desire for significance. We want to know we matter. We want to know we count for something. But the best way to count for something is to stand for something - or better yet, for Someone. And the only way we'll ever stand is on our knees with lifted hands.

"When I talk to people about this innate desire, I ask, 'Do you ever wonder if maybe it's your spirit longing to be more than just an audience to somebody else's fight?' We weren't created to be the audience. We were created to take part in what God is doing in his world. This song is an anthem of encouragement. It's one brother reminding all of God's men we were meant for greatness, and that greatness is defined in contagious and courageous abandonment to Jesus. We have a men's Bible study at our church called Man Up. It's a group of about 150 men who meet on Wednesdays, and they're the crowd that is singing in the background on this song. They sang with gusto and a wonderful spirit. Maybe it's because it's one place where they're learning real action heroes are the ones who actually surrender." 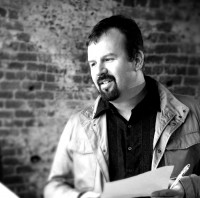 Another powerful Hall anthem on the album is "City On The Hill". Said Hall, "This story song depicts the body of Christ. Jesus himself referenced his Church as a city on a hill, a beacon of welcoming brightness and truth to the world. The song draws a picture of two old men sitting and talking. They're trying to remember what happened to the city on the hill because it's not there anymore. As they weave through the stories, they remember the warriors thought everyone was weak so they went off and started their own city. The dancers didn't think everyone had enough spirit so they went off and started their own city. It's an allegory of the factions of the modern Church, the result of predominantly like-minded people often dwelling upon non-essentials and personal taste to go their own direction.

"If you were to walk in your church right now and ask five different people, 'What is the most important emphasis in your church?' each would give a different answer. One would say the proclamation of God's Word is most important, one would say discipleship, another would say small groups, and yet another would say missions. God designed us with different personalities and preferences. Unfortunately, we often make personalities and preferences the priority. First Corinthians 12 inspired this song. The Apostle Paul recognized the differences in us all - some of us are a hand, some are a foot, some an eye - but we all serve a distinct and important purpose and are interdependent. We have to dwell on our like-mindedness if we are ever going forge a lasting impact for God's Kingdom. The song reminds us that we really do complete each other in the Kingdom when we come together."

A song that is particularly close to Mark's heart is "Already There". He said, "I sit in my office with a lot of seniors in high school, a lot of parents who are at what they see as a fork in the road and they somehow think 'I'm going to make the wrong decision and I'm going to ruin my life. . .' This didn't become a song for me until our little girl Hope was in the hospital for three weeks in Cincinnati. I was encouraging my wife, saying that 'Jesus is already there. He knows how this is going to work out. We're going to have to draw from him.'"

Mark admitted that the song "Jesus Friend Of Sinners" (not the Paul Oakley song) is rather hard hitting. He commented, "When I first read the lyrics to my wife, Melanie, she gave me that cocked eyebrow look. 'Okay, are you sure you can say that?' she asked. While it's true this is one of the more direct songs we've written, it also speaks truth. And I think believers should speak truth to each other as long as we do it in love."

Mark spoke about the message of "Jesus Friend Of Sinners". "We get mad at the world for sinning, but people sin. That's what they do. Jesus isn't in them; there's no compass telling them anything else to do, so they are just going off their gut. And they're sincere, but they're sincerely destroying themselves. The way to reach people is not through pointing all that out to them constantly and sniping them from above. It's coming down below them, throwing them up on our shoulders and saying, 'Hey, let me carry you to the truth and let me tell you that I'm not perfect and I've messed up and God has rescued me as well.' Instead of telling the world what we're against, let's tell them who we're for."