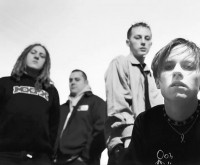 What are the roots of Cephas?

(Ray Driscoll, drums) The idea for the band started in Adam and John's bedroom whilst they were spotty teenagers. Having been into punk for some years, the boys were fed up with being stuck between a rock and a hard place. On one side, there was secular punk music, most of which had a really negative attitude, and on the other side there was the lame UK Christian music scene, many years behind its secular counterpart, and quite clearly one-dimensional. We all met through a bizarre set of coincidences. The lads met Andy at Spring Harvest, he was in the apartment opposite and happened to be into punk, played bass and actually lived two miles away from where the boys came from. Finally, Ray was added to the band after his stint with sedate indie pop band If Only came to pass.

Punk music seemed to die out in the UK after the '70s. What's brought it back in the UK and what attracted you guys to it?

(Adam Bones) I got into punk because it seemed so relevant and sincere. I was into other alternative types of music before, but punk affected me much more.

(John Peddie, lead vocal) It's the idea that bands can have something to say and the DIY approach. Anyone can be in a punk band. I believe punk is more an attitude than a fashion label. There's a lot of so-called punk bands on the scene with nothing more interesting to say than I had to break up with my girlfriend. I believe we're the most "punk" band in the country right now. No one else is saying anything and the general apathy around makes me sick. I want to be in a band that says something and means something to someone. We never had a Christian punk band to listen to so we thought we'd be it. We thought it was this really original idea and then realised as usual the Americans had got there first with bands like MxPx. I hate the idea that U2 are the only Christian band anyone goes on about.

I understand you play mainly "mainstream" gigs. How quickly does a non-Christian audience pick up on the fact that you are Christians?

(Ray) Usually it's extremely confrontational, everything you would expect from the punk scene. We've had bottles thrown at us, been spat at, threatened and insulted by people angry that we talk about God within the punk ethic. Saying that, we've had some amazing experiences whereby after the shows we've ended up praying with people inviting Jesus into their life. The kids are usually very hostile, but it gives you something to work with. Unlike most other cultures, a punk will come and tell you they think you are talking rubbish rather than be polite and leave at the end of the night. It's then you have an opportunity to witness.

What do you think of the dozens of American Christian punk bands?

(John) I wish they'd come and play over here more often. I love what MxPx have done by breaking out of the Christian label thing and getting on one of the most respected American punk labels and playing festivals like the Warped Tour. Slick Shoes are doing it too. I hate the idea of Christian bands playing to Christians. I can understand their role in encouraging Christians with their music, but it should be able to stand up to the criticism of the general media. I don't think much Christian music is any good and I'm not saying we are, but at least we're giving it a go in the secular scene rather than the Baptist church tour. 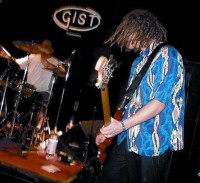 (Ray) There are a few at the head of the pack who I like, MxPx, Slick Shoes and The OC Supertones. Most of the other stuff I've heard is pretty repetitive.

What's your favourite song on the EP and why?

(John) "New Wave", purely because it says what we're about. It's the cause a riot line in the sense that we're gonna cause a revolution with Jesus at the centre and people aren't gonna like it and they will get mad, but we believe it's the truth. I think that track has attitude.

(Ray) I like "New Wave" for its lyrics, it's pretty much our manifesto. Musically, "Puppet Show" is probably the best.

What plans do you have for the future?

(Ray) We are spending the next 12 months trying to get signed to a secular label. Getting signed to a Christian label is fine if you want to spend the rest of your time playing churches and Greenbelt. We are aiming to bring God into the mainstream through our music. A secular label is the only way we can do this. That's the objective, God willing.

(Adam) Totally. The world and all the lies it sells you just leaves you so dissatisfied. Is it that hard to accept that we need the God who created us?

If you could say one thing to Johnny Rotten, what would it be?

(John) Jesus was a punk! And, uh,.would you sign my CD please?
(Ray) Yes society sucks, but there is an answer. You are more like Jesus than you may well think!

Having saw MxPx in London this year and TV Smith, I thought about Cephas. They were genuinely good!!!
What happened to them

For more on Cephas visit the Cephas artist profile