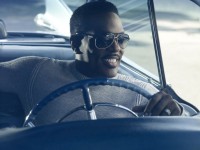 Say the name Charlie Wilson to followers of '80s Christian heavy metal and you might get back a remembrance to when a British singer of that name fronted the pioneering UK band 100% Proof. To a broader sweep of music fans though, particularly those following mainstream R&B music, Charlie Wilson is the Grammy-nominated star who since his days in the '70s when he was clocking up huge hits as the frontman for The Gap Band (who can forget "Oops Upside Your Head"?) through to his string of successful solo albums and a much praised Justin Timberlake TV appearance about which the critics claimed Wilson stole the show from Snoop Dogg, Pharrell Williams and Timberlake himself, Charlie has been a much admired showbiz personality.

In 2017 Charlie enjoyed one of the biggest hits of the year on US Gospel radio with the track "I'm Blessed (ftg T.I.)". Anyone who has read Wilson's 2016 autobiography I Am Charlie Wilson won't have been surprised by the award winning R&B and funk singer's move into gospel. As the music biz veteran said prior to the release of his 'In It To Win It' album on which "I Am Blessed" featured, "Everything that I have now and everything that is working in my life, God arranged it."

The lyric of "I Am Blessed" is a simple celebration of the blessings of everyday life. "Ask me how I'm doing, I'm blessed/Living every moment, no regrets/Smile up on my face, I'm like 'I'm Blessed yes I'm Blessed'/Waking up thanking God every day is feeling just like Sunday/Wifey fly, by my side, green light/Everything is going my way/Riding clean, living dreams."

Charlie wasn't always living clean. After his years of stardom with The Gap Band by the early '90s he was addicted to cocaine and alcohol and for two years lived on the streets of LA's Hollywood Boulevard. Finally he came to his senses and sought help and entered rehab in 1995. It was there that he met a Christian drug counsellor called Mahin Tat who guided him to the path of recovery. He married Mahin that year.

Wilson later said, "I was powerless over the drugs and I just prayed to God. When you surrender that's when things start happening for you and God starts working miracles in your life. As soon as I did that my life changed." The singer spoke of his marriage to Mahin as one of his greatest achievements. He said, "God speaks to this woman all the time and he placed her in my life so I could live a healthy and happy life because everything that I had done on my own just didn't work."

The veteran is today anxious to acknowledge God in all his performances. He said, "Wherever I do shows I am dropping and giving God praise," shared the energetic performer. "I promised him that if he was to get me off the streets and out of the curve and from the darkest alleys and the worst places in life, that I would praise him wherever I was at. Every time I shout him out blessings fall from the heavens, left and right the blessings have come from everywhere. I've had that chance that everybody wishes they could have. I didn't receive all those things when I was younger and God has allowed my latter days to be the better days. He has allowed me to have a ministry of music. I believe that God has kept me living so I can be a testimony for others."

Charlie's album 'In It To Win It' was released in February 2017. Peppered with special guests Snoop Dogg, Robin Thicke and Lalah Hathaway it was his collaboration with the mainstream hit rapper T.I. (another hitmaker who has struggled with the dark side of life but is now established as a devout member of the New Birth Missionary Baptist Church in Atlanta) which has given him the surprise gospel radio hit "I'm Blessed". He said, "It says exactly where I am in my life, blessed to still be making music that people want to hear. 2016 was a tough year for so many people around the world and I am proud to release a song that reminds us that we can all find some blessings in our lives. Having T.I. add his flavour to the song and share who he is and how his journey is filled with blessings is an added bonus."