Of the many hundreds of American Christian artists still to achieve a UK release, few make music of such transcendent power as CHRIS LIZOTTE. The Californian singer/songwriter spoke to James Emerson. 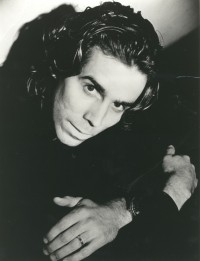 Once in a while an artist emerges in the States with the pristine creativity and prophetic power to demand coverage in the pages of Cross Rhythms even though his albums have not been released in the UK. Such an artist is Chris Lizotte. Despite four fine albums to his credit, the California-based singer has had no UK releases save for a lead vocal track on the 'Lord Of All' Vineyard album. Yet this gruff-voiced musical communicator, whose influences range as wide as Blind Willie Johnson and Bruce Springsteen, has produced some of the most impassioned and powerful music to emerge out of America's Christian underground. Now with Word Inc having just acquired the label for which Chris currently records, Metro One Records, maybe the time has at last arrived when Chris will be known in the UK by more than a tiny cognoscente searching out import albums.

Once Chris Lizotte's albums are released here, it could be that he will become as well known as his friend and mentor Kevin Prosch. Comments Chris about Kevin, "Kevin was on staff at the Anaheim Vineyard in 1992 and he said that God told him to lay down his guitar for a season and play Hammond organ for me, and to teach me about worship. I am still amazed when I think about how a man far more talented and gifted than me would lay down his guitar for a year and do what he did, nurturing me. I am forever grateful. Lyrically, Kevin is out above the rest, he is very gifted and I am very influenced by him - I love the new Tumblin' Ground' album especially."

Kevin Prosch features (on Hammond) on Chris's second album, 'Chris Lizotte And Soul Motion', which also brought in Raymond McDonald on guitar (more of whom in a future CR). It's a remarkable album, on the one hand 'sparse' musically, but on the other, full of great riffs and breaks, and most characteristically, the impassioned 'growl' of Chris's voice which, while it makes that album, dominated his first solo effort, 'Free'. I asked him where such a vocal style came from. "Well," Chris said, "I do just cringe when I listen to my first record and how bad I feel I was! I probably hid behind my 'rasp' too much then' but I hope I'm getting better at singing now!"

Chris Lizotte's career began at New Breed Records, which was/is the contemporary label Vineyard Ministries launched to give scope to the mass of musical talent the church attracted. Converted in 1978, Chris started playing guitar in a number of Christian bands, found his way via Calvary Chapel to the Anaheim Vineyard, and went solo in 1990. "Yeah," said Chris, "I got saved in the late 70s at Calvary Chapel, actually at a musical event happening there -and now my wife and I are part of Vineyard Newport Beach, although I am still part of the prison ministries team at Anaheim."

These last two years have been especially busy - not least with the birth of Lizotte number two in 1994. Also that year, his third album 'Long Time Comin" was released (featuring a duet with Maria McKee) to a host (justifiably) of commendations. Chris continued, "Also that year I toured in Switzerland and I got ready another album 'Human Kind' which was recorded in spring this year whilst doing a western USA tour with Crystal Lewis (whose husband runs Metro One). Then I did a five-week tour or Switzerland, Italy and Germany; in July I toured Japan for a fortnight - which was really something! - then back over to Switzerland in August before playing the Flevo Festival in Holland."

Any particular highlights? "Well, in Switzerland this last time we were playing a worship song, at the end of which we played an instrumental improvisation for one solid hour. It was all arranged and orchestrated by the Holy Spirit, and everyone was simply worshipping the whole time. The stuff we were playing was way beyond our capabilities and the sense of being in God's presence left me totally in awe. I generally tend to feel more at home in a Christian environment - of course, I'll happily play in front of any audience, saved or not - but that was a remarkable occurrence."

Chris Lizotte's own passion for the Lord is strikingly apparent, but what grabbed me at first (and still does) is the un-clichÃ©d freshness and honesty of his albums, locked in with musical quality and scriptural solidity. He sings songs with lyrics and sentiments we could all 'amen' - identifying with the marginalised, and with the sorrow in life - but especially, Chris has an anointed ability to capture both the pain and the pleasure of following Jesus in imaginative and colourful music. Chris Lizotte's music is definitely worth searching out.

The opinions expressed in this article are not necessarily those held by Cross Rhythms. Any expressed views were accurate at the time of publishing but may or may not reflect the views of the individuals concerned at a later date.
About James Emerson
James Emerson lives in Stockport, follows Middlesbrough FC with a passion and is part of Vineyard Christian Fellowship in Manchester.