Chris Lizotte: The US CCM veteran making waves in the UK

Few indeed are the American artists whose recording debut in the UK gets a Cross Rhythms 10 square review. But then, CHRIS LIZOTTE, though he is new to UK listeners, is a CCM veteran with four fine albums to his credit. Tony Cummings investigates 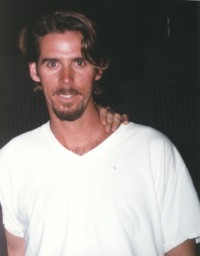 If you'd named one artist whom I'd consider offering a limb to get onto the Cross Rhythms: Roots & Branches bill then it would have been Chris Lizotte. Ever since being introduced to this extraordinary artist's albums (rather belatedly due to the fact that for some inexplicable reason they remained unreleased in the UK) this passionate, gritty and, dare I say it, anointed rock music communicator has been a mainstay of the music played loud and clear in the Cross Rhythms editorial office and that broadcast to the nations through the beavering activities of Messrs Cole and Bellamy.

When prolific CR journalist Mike Rimmer reviewed Chris's last two CDs (now gaining UK exposure via Kingsway's representation of Metro One) it was no surprise that Rimmer identified them for the classics they were. About long Time Coming' (1994) Mike wrote, "It's one of those albums packed with emotion with a voice that's a cross between pre-Ziggy Bowie and Chris Isaac, 'Long Time Coming' has everything: well crafted songs, atmospheric playing and a duet with Maria McKee" while about 'Human Kind' Mike raved, "Great voice and one of the best albums of the year. It doesn't get better than this."

Bringing Chris in to Britain in June to play some support gigs to Kevin Prosch And The Black Peppercorns was a smart move as it renewed an old association (Kevin played organ on Chris's debut album and the two have ministered together in times past at the Vineyard axis of churches) and put Chris on a platform where he is most comfortable - that where rock music connects with a prophetically challenging, Spirit-anointed ministry. I began by asking Chris over a crackling telephone line how many times he'd been to the UK.

"Cross Rhythms: Roots & Branches is my third visit. The first time I went, I went with Bryan Ray who co-owns Metro One. We went to talk about distribution and the possibility to do a tour. The second time I came to the UK was to do the gigs with Kevin. I did four concerts."

What happened at the Prosch/Lizotte gigs? "We would lead worship and stuff and people would be dancing around, raising their hands up - but I think they might have been just drunk or something."

So what did Chris think of the current wave of blessing (Toronto to you) which many British churches are experiencing? "It was really amazing spiritually," Chris responds. "I really felt we were experiencing the first green shoots of revival. One church we played at a powerful, powerful move of God was really evident. To be honest with you I have a problem with the term Toronto Blessing. I feel that God is everywhere in the world and doing something everywhere in the world. I'm not doubting that people are experiencing a touch from the Lord. I just think that Christians are putting too much weight on the Toronto Blessing. I think that phrase is being hyped a bit."

Those that are familiar with Lizotte's previous work will note the distinct lack of blues licks on the critically acclaimed, modern art rock sound of 'Human Kind'. "I feel like I'm not writing a whole lot different now. It's just the sounds on the record are totally different, and the players are different. It's definitely more of the influences I've grown up with."

One area that hasn't changed is Lizotte's personal, passionate lyrics. The personal pronoun T appears frequently in nearly all of his current songs. Whether writing about sensitive issues like his own short-comings or even the things that matter most to him, his heart remains transparent beneath the lyrics and music.

"I've definitely made my mistakes," Lizotte says, "and preached when I wasn't supposed to. I've not said something when I felt like God was speaking to me to say something."

Now with four recordings behind him, Lizotte is not single-mindedly focused on the business of music. Once a month, he brings his music to a women's prison and leads worship for the inmates. "It's really been a ministry to me. I don't know how many times I've gone in there and been so ministered to by them - by their testimonies and how they handle being locked up, (many) of them for life," he says. "I've been going about four years now and I've really realised that God's grace is so huge and that there really isn't one person better than another, how sin is sin in God's eyes and how God just forgives."

Looking back on his recorded output what did Chris think of it? "I hope the best of it is yet to come. I know that my recent record is the easiest one for me to listen to!"

Having appeared on two or three Vineyard albums some years back things seem to have gone full circle for the singer with Metro One's new worship series 'With One Voice' on which Chris leads worship on half of one of the first two albums. I asked the singer about the series. "I get asked to lead worship a lot at different conferences, churches, etc. Mostly I enjoy leading worship because it's not so much about me. I'm overseeing the whole 'With One Voice' series and I'm on the first one. I'm finding worship leaders from different denominations - Bible-based Christian churches."

Personally, I found the first two 'With One Voice' albums very fresh and free of the production line quality that has plagued many US praise and worship albums down the years. "Maybe we're doing something a little differently, we're not a worship label, we're not mass producing worship records. I kinda feel that Maranatha, Vineyard, Hosanna have kind of a tough job. They rely on putting out a lot of product and it's kind of easy for them to end up all sounding the same. For me it's different. I'm working with a worship leader at the moment, Rich Ochoa, who is 19 years old from Oregon and he's got a voice bigger than Joe Cocker and Ray Charles! I think Hosanna, Vineyard or Maranatha just wouldn't have countenanced recording him. But Metro One is a company with a contemporary base. We have a real opportunity to do fresh worship because we're not using the same people every record."

When Chris plays Cross Rhythms: Roots & Branches will he be playing with a band or solo? "I don't know at this moment. I had a call a day or two ago from Richard Cawson (the keyboard player with the Black Peppercorns) and there're some other fine British musicians I'd like to play with like Les Moir, Bryn Haworth..." Chris laughs and it's time to go before the phone static envelopes us both. But come 5th October I, and a thousand others, will be hearing Chris loud and clear.