Chris Tomlin: Breaking Through The Darkness To See The Morning 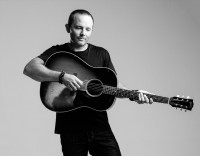 Although British Christian music fans may question the rather perverse decision of Nashville's Gospel Music Association to name Chris Tomlin Artist Of The Year and indeed the whole practice of handing out such awards to worship leaders, no one can argue with influential trade magazine Billboard's recent description of Tomlin as "the Christian industry's most successful artist." Tomlin's 2003 album 'Arriving' has sold an unprecedented quantity for a full on worship project (close to 600,000 copies) while his guitar-driven pop rock worship is at the epicentre of the Passion events which have galvanised a whole generation of young collegiate worshippers. Tomlin currently has seven songs in America's Top 50 Christian Copyright Licensing chart. He records for Sixsteprecords, a label owned by Passion founders Louie and Shelley Giglio, and his brand new album 'See The Morning' has just been issued EMI CMG in the USA and through Survivor Records in the UK.

"'See The Morning' expresses the idea that God's as faithful as the rising sun," explains Tomlin. "Though your life may be shifting all around you and it may be dark, there is hope." Chris cites empowering Biblical stories from Psalms, Exodus, Lamentations, Joshua, Isaiah and some accounts of Jesus' miracles in the gospels to draw a resolute conclusion. "From these stories I'm inspired to notice morning as an incredible symbol in Scripture. Morning is brand new. It's fresh. It's new life. That while the darkness came and was for a while, light is breaking through into morning."

Combining the artist's strong signature hooks and accessible choruses with the production expertise of the award-winning Ed Cash, who also produced 'Arriving', 'See The Morning' also uses the songwriting gifts of Britain's Matt Redman and the Redman/Tomlin collaboration is "How Can I Keep From Singing", a rendition of a 1860 hymn, words penned by Robert Lowry: "How can I keep from singing your praise/How can I ever say enough/How amazing is your love/How can I keep from shouting your name/I know I am loved by the King/And it makes my heart want to sing."

Another standout track is the high-energy "Let God Arise" a rambunctious rocker inspired by Psalm 68:1 affirming that death does not get the final word over humanity. "You cannot play something titled 'Let God Arise' as a ballad at 75 beats a minute," Tomlin laughs. "We, as a band [Jesse Reeves (bass), Daniel Carson (guitar) and Travis Nunn (drums)] love to play loud and get people going. This is our rock and roll song." Often testing new songs like that one on the road and in churches before deciding to record them, "Everlasting God," written by Brenton Brown and Yfriday's Ken Riley and inspired by Isaiah 40, is already a staple chorus at Austin Stone Community Church, which Tomlin co-founded in 2002.

Closing the album is "Amazing Grace (My Chains Are Gone)", a new rendition of the classic hymn. "I wasn't sure I wanted to mess with the most recognized hymn ever," Tomlin admits. But after researching the song, he discovered the famous John Newton hymn has withstood previous editors. Reviving an original verse that had lost popular favour over the years, combined with a new chorus co-written with Passion founder/director Louie Giglio, Tomlin rekindles a church standard for a new generation of worshipers. "My chains are gone/I've been set free/My God, my Saviour has ransomed me/And like a flood his mercy reigns/Unending love, Amazing grace!"

Billboard asked Chris why the song "Made To Worship" was the first single from 'See The Morning'. He responded, "I just felt from the start that was a great leadoff single. It has that radio sensibility but is a worship song as well. I love singing it, and it's just a good feeling song." In the same interview Chris gave non-church going Billboard readers a definition of worship. "Worship is about the heart and it's about your life, it's not about any type of song. It's about giving glory to God. I want to do that through my music. Hopefully, my songs will lead people to do that and give a voice to people. The style of worship songs will change, but the heart of it never will."

Chris then went on to tell the magazine about his long time relationship with Sixsteprecords and Sixsteps Management. "We started in 2000. This will be my fifth record on my own with Sixsteps, and I've been a part of all the Passion records. I think there are eight or nine of those. We've done quite a bit in these six years. It's a family. Matt Redman, David Crowder, Charlie Hall [also on the Sixsteps roster] and myself were a part of this family. We wanted to keep it family and wanted to have that community within ourselves. We knew that if we broke off and did our own different label things that somehow it would tear that family apart because there would be too many different people involved and management and all those kind of things."

Chris Tomlin may have found himself catapulted to Christian music fame but he's an artist determined to keep his feet on firm spiritual moorings. He recently told Christian Retailing magazine, "It's just a process of being faithful where God puts me. I'm happy to walk in it. I'm surrounded by such great people that keep me where I need to be. I'm a part of my church at home, that's a joy for me. Those things haven't changed. We've received a lot of awards, but at the end of the day, I know that's not what God counts as success."

As a new Christian, I just found Chris Tomlin's music and I am humbled - the songs make me weep. God bless you, Chris, for glorifying His name and sharing His Word through your music, a precious gift from God.

I'd have to agree with Edward... God has definitely given this guy some amazing talent! He really knows how to write a song. But most importantly, his songs glorify God. That's what it all comes down to.

I love Chris Tomlin's songs. They bless me a lot and may God continue blessing him in the gift of worship. The songs make me connect with God.