Bradford-based pop/punk/ska band CHUCKY NO STARS are aiming for big things. Tamsin Jones fills us in. 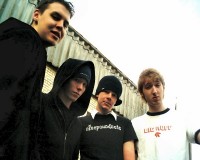 The boys have already been labeled the "new answer to Busted" after forming just a year ago, with a busy agenda over the next few months on two UK tours and a USA tour.

The band, comprising of 19 year-olds Jonny Fallon (vocals), Smuff (guitar, vocals), Alex Krempic (bass) and Chris Kitson (drums) say that their music fails to fall under a specific genre. "We thought it would be funny to call ourselves a dance/punk band because we couldn't really think of any other bracket to fit ourselves in! We went from being a sca/punk band, but the problem was we got a bit fed up of going in this stream of bands where there are so many and you just don't stand out. I think one of the biggest inspirations for us is the band Relient K. They're a Christian pop/punk band who play a similar sort of music. To see a Christian band doing that and basically doing what we want to do is a pretty amazing thing. We really look up to them."

Even though the boys have been together under the name Chucky No Stars for only a year, they're getting stuck in almost straight away. They've recently finished a two-week USA tour supporting Waving At Strangers and in September supported Best Of Enemies. Three out of the four members of Chucky No Stars came out of similar punk band, ninepoundnote. But it was only due to Jonny's, Smurf's and Chris' sense of vision and God-centred direction that allowed them to be where they are now.

On the band's website, the boys say, "Our concept is simple, we play music we enjoy, that a lot of teenagers can find accessible and packing a punch with meaningful lyrics which will hopefully encourage them to go all out for God. We understand how tough it is to take on board everything the Bible says and we understand how tough it is being a teenage Christian. We know we're only 18 so we're breaking it down and spreading the word of how we deal with it along with some phat techno beats you can get down to."

With the band playing a lot of mainstream shows it's inevitable that they be faced with a lot of temptation, especially if they're heading towards the mainstream. "We try and keep our head high. I think we'll be ok if we just stick together as people, as Christians and as a band. In Romans 13 it tells us to not to get exhausted and absorbed in our day to day obligations, so much so you lose track of time and doze off. It's all about trying to stay there with God and not forget what we're in it for. It is hard when we are on tour, especially with the other bands as they have different opinions and stuff, but they don't have anything against us because of what we believe which is really cool and that helps us a lot."

Any time now will see the release of the band's debut album, one of the tracks being "Divine Devoid Divine". Jonny explains, "It's about my younger years, at the point where I became a Christian and how I gave up running away from God. I knew he was there all the time and I could feel him there behind me. It's basically about giving that up and turning towards him."

No wonder these boys are so busy. Their hearts and attitudes are absolutely spot on. And to think they're all under the age of 20. Be sure to stay posted on the release of their debut album coming soon.