Citizen Way: The pop rockers from Elgin, Illinois once known as The Least Of These 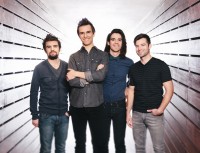 After years of dues-paying Illinois-based Citizen Way are on the cusp of breaking through to CCM's upper echelons. Their songs "Nothing Ever (Could Separate Us)" and "Should've Been Me" have already received considerable US Christian radio play while their powerful anthem "Sing, Sing, Sing" was used in the titles of the much-watched documentary Finger Of God.

The roots of the band go back to Judson University in Illinois. The band, then known as The Least Of These, played their first concert there on 3rd September 2004. Citizen Way's lead singer Ben Calhoun explained how he and his brother Josh started the group. "We had two friends from our home church, Sam Lima and Neil Lubke, with us for about a year. Josh was our drummer for the first six years. David, Ben Blascoe's brother, joined us on drums three years ago and Josh moved to vocals, keys and guitar. We've been two sets of brothers for a while now and it's been a great strength for us!"

In an interview with breathecast Ben Calhoun spoke about the intriguing dynamics of two sets of brothers in a band. Said Ben, "We had to learn how to fight good (laughs), that's what I always tell people. Really the best thing about what we do is that we are brothers and the hardest thing about what we do is that we are brothers. There is a family dynamic that is really special and difficult to work with as well. Think about the enemy, he wants to divide us. There is power in my brother (Josh, guitar/keys/vocals) and I and Ben (bass) and David (drums) being brothers and Satan wants to be a part of dismantling that at any time. So we have to learn how to be not only brothers, but business partners, money and all that kind of stuff that comes in. You just have to really learn how to be servants to one another."

The singer spoke about the nine years together as The Least Of These. "We did independent everything, records, everything. Our biggest involvement was at Christian Youth retreats and camps. We had made a significant investment there." During that period the group recorded the albums 'The Least Of These' (2009) and 'The Vintage Album' (2011). Eventually the group came to the attention of major CCM label Fair Trade Services. Ben recounted, "We were with our friends VOTA a few years ago and their lead singer, Bryan Olesen, told Fair Trade Services about us. We went down to Nashville to meet their A&R team. We didn't sign then but stayed in contact. When I wrote the song 'Should've Been Me' our friend Vince Barlow helped us get to Nashville again to play for another record company. While we were there, we also met with FTS again and they signed us! We couldn't have done any of that on our own. The Lord put great people in our path and he orchestrated the whole thing. It reminds me of Proverbs 16:9 - 'In their hearts humans plan their course, but the LORD establishes their steps'."

On signing with Fair Trade Services one thing became transparently clear - the need for a name change. In recent years different Christian rock bands from Tennessee, New York and Texas had all released CDs under the name Least Of These! Explained Ben, "Our label said that when they were shopping us around, producers couldn't find our website. We talked about it and since we had gotten signed we thought this would be the best time to switch our name, so we did. Our bass player's (Ben Blascoe) wife actually came up with Citizen and then after throwing around some different names for a second word, decided on Citizen Way; being citizens of the kingdom of God, followers of the way Jesus lived. The Bible in Hebrews talks about our citizenship being in the kingdom of Heaven. The name enables our audience to feel like they are a part of something with us together."

The group's debut album as Citizen Way 'Love Is The Evidence' was produced by Seth Mosley. Ben spoke about the song "All Things". "My daughter Ava and I met a homeless lady in the park one day. She told me she was thankful for what she had; she had nothing. I gave her some money, a new backpack, and my contact info. She called a couple of weeks later to say thanks and that she found a place to stay. The bridge of the song was written in response to a friend battling Leukemia and our friend Craig from KLOVE told me that his sons were on a missions trip when the van broke down. So they sang songs on the side of the road and thanked God because the Bible says in 1 Thessalonians 5:18 to 'give thanks in all circumstances; for this is God's will for you in Christ Jesus'. This verse is hard to act on, but these people did so on days, I know, I have complained about something trivial."

Another standout on the album is the radio hit "Should've Been Me". Explained Ben, "It comes from a true story of when I was leading worship at a camp and we asked the kids what all they had learned from the week. During the camp we had taken them on a crash course from Genesis to Revelation and the stations of the cross. I'll never forget, there was a kid there who responded and simply said, 'I learned that it should've been me.' I thought, what a pretty profound thing for a 13-year old kid to understand the gravity and weight of what Christ did for each of us on the cross and how he paid the debt of our sin with his life. It really moved me and I wrote this song right away and sang it for them about 20 minutes later."

With a new album to promote Citizen Way are playing more concerts than at any time in their history. Enthused Ben, "We're currently touring with Big Daddy Weave, Chris August and Mikeschair and having a blast. It's been life changing for us. They are great men of God and we're sincerely grateful to them for their example and friendship. We're also looking forward to being a part of the KLOVE fan awards this summer and we're thrilled to tour with Sanctus Real this fall. Matt, their lead singer, Seth Mosley and I wrote the song 'Love Is A Mess' (on our debut record). When we're not on the road, we love down time at home with our families and plan as much of that as possible. I will teach a class or two at Judson University as well. I like using Micah 6:8 when thinking about my future: 'Do justly, love mercy and walk humbly with your God'. There's a great Steven Curtis Chapman song about that verse. . . and I'm a huge SCC fan! I hope the future brings a tour with him!" 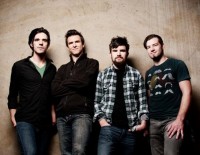 When asked to name a Scripture which had impacted the band recently Ben plumped for Romans 12:2: "Be joyful in hope, patient in affliction, faithful in prayer." Commented Ben, "As Christ followers, with our platform, we have the responsibility to represent Jesus and what the Bible says. We are nine years in as a band and if we continue to live by verses like this, we'll be alright. We've also learned (again) how awesome our families and friends are. They each have a brick in Citizen Way's foundation with their name on it."