Illinois' Citizen Way release their interpretation of "The Lord's Prayer" 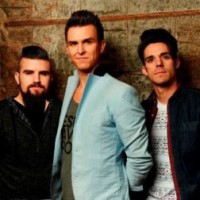 A SINGLE, "The Lord's Prayer" by the Elgin, Illinois-based trio Citizen Way, is set to be released on 2nd August. The song is from the band's third studio album with Fair Trade Services, to be issued this autumn. Said Citizen Way's frontman Ben Calhoun, "We live in a world that craves truth but we are constantly bombarded with lies. When the people of God sing scripture together, the truth is revealed and evil can be dealt with. We want to lead people to Jesus, the only source of truth and the original author of these words found in Matthew 6." "The Lord's Prayer" follows the band's hit song "Bulletproof", which has received over 40 million streams across digital platforms.