Love Is A Lion 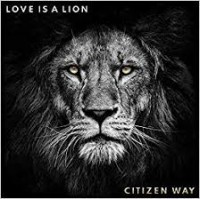 THE THIRD album by Illinois-based Citizen Way, 'Love Is A Lion' is to be released via Fair Trade Services on 18th October. The band have already seen considerable US airplay with the album's first single "The Lord's Prayer." Lead singer Ben Calhoun spoke about the album, "Each one of these songs is founded in God's Word. They are the stories of our lives and the people we get to live and serve with. We hope you enjoy it as much as we do."