The debut album for American CLAY CROSSE is getting a major push both here and Stateside. Jan Willem Vink investigates what all the fuss is about. 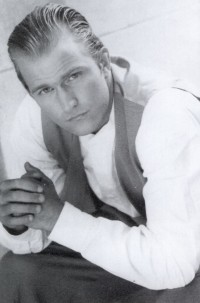 Clay Crosse, relative newcomer in the field of contemporary Christian music, got the honour of having his album debut produced by hot mainstream producers Peter Bunetta and Rich Chudacoff. Bunetta and Chudacoff have in the past been responsible for albums by Michael Bolton, Kenny G, Judy Collins and Smokey Robinson. It is no wonder influences from these mainstream stars find resonance on Crosse's debut, 'My Place Is With You'. In Christian music territory Crosse's music finds common ground with Michael English. Clay is delighted with the radio-friendly quality of his albums.

"We said to Rick and Peter that we love the sound of the projects they worked on before this one and we wanted that same quality on this project. We didn't hang over their heads that this is a Christian record when we made this album. So we provided the gospel/inspirational lyrics and they provided the pop sound that we wanted."

Crosse was born in Memphis, Tennessee. His mother, a piano teacher, plus a musically-gifted aunt, encouraged the whole family to sing at gatherings in their hometown. Clay began to develop his own style of singing as a teenager, performing at Leawood Baptist Church where his mother was a pianist. The enthusiastic reception the congregation gave him after his first solo performance served to positively reinforce his dreams of a musical career.

"Two years ago my wife Rene and I moved here to Nashville for me to pursue a career in music," says Clay. "I sang anywhere I could. I sang in my church a lot, I was in different groups in high school and college. I was in different contests. I performed at a theme park in Memphis called Liberty Land for two summers. That was very strenuous. It was four shows a day, seven days a week. That's where I got my most valuable experience singing before an audience. That's where I really got used to just getting up before an audience and just singing and not being nervous about it. That's the main place I learnt that."

One evening Clay gave a demo tape to Gary McSpadden, a veteran in Christian music who was performing a concert in Memphis. On his way home, McSpadden popped the tape in his cassette player and got so excited that he pulled his car off the road and waved at the occupants of the following car. "You've got to hear this," he yelled at them before playing the tape to his son and partner, Ron Smith. Soon all three were enthusing over the voice that almost caused a traffic accident.

Crosse was signed to McSpadden and Smith's management company. In 1993 Crosse was offered a contract by Reunion Records and it was decided to put Clay with Bunetta and Chudacoff.

Working with these two men was an enlightening experience for Crosse. "They let me be myself and to express myself as I wanted to. They never said, 'No Clay, we don't want it that way, why don't you sing it like this.' They're just extremely skilled at working not over but alongside a vocalist. Rick and Pete, I can't stand up for these guys enough. Although my face is on the cover of the album, it's theirs as much as mine. The players they brought in, the background singers, their skill in pulling it all together. I'm totally amazed by their talents."

Clay believes slower-tempo songs to be his particular forte. "I consider the ballad a true test of a singer's strength. It's also the most emotional type of song I can sing, which I enjoy singing the most."

Clay is fairly eclectic in his musical influences. "I like all kinds of music, but in particular I grew up liking the Commodores and the Eagles - in particular Don Henley's voice on the Eagles things, I liked him a lot. More recently I'm more into Micheal English, I think he's a great singer."

On asking what he thinks his place in Christian music is, Clay responds, "My producers Rick and Pete and myself think we have done an album that has a fresh sound. Although we'll be compared to other artists, we think it stands on its own. I'm excited because this album will open a lot of doors for me. I'm exited about the opportunity in particular to do two things: to minister to the body of Christ and to share Christ with those who don't know him. I'm certain that through this album I will be able to do those things."

Of the songs on his debut Clay has written none himself. "I listened to many, many songs in the deciding process of what songs would go on the album. On each one I asked myself: 'Can I pull off this song in a live situation? And can I honestly say the things that this song is saying?' Of all the songs on my album I can honestly say yes to both of those questions. I feel completely confident in singing those songs. 'I Surrender All' is about turning every single aspect of our lives over to Jesus Christ and the ultimate peace that accompanies a decision like that.

"'Where Angels Dare' speaks about how this world is full of a lot of hurting people. They need a lot of things; most of all they need Jesus, which we all do. It is our responsibility as his children to share Jesus with them. As that song states: 'Where angels dare to go, that's where we must go to share God's love.'"

With his quiet, smooth and accessible pop, Clay will soon win fans. "I like songs that inspire you, make you good, the kind that just kick back and move you. I like good, driving songs."