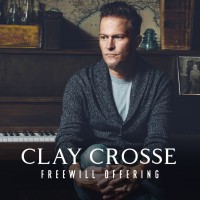 DOVE AWARD winner Clay Crosse, who in the past has had several playlisted songs on Cross Rhythms radio, released on the 11th October an independent EP, 'Freewill Offering'. Sean Hill at Uphill Studios produced the project which contained Clay's 2017 single "Streets Of Capernaum". Crosse was named New Artist Of The Year at the 1994 Dove Awards.