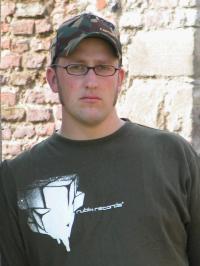 Of all the sub-genres within dance music, the one most seldom explored by Christian DJs and producers is drum 'n' bass. Despite it being a fully fledged scene with a devoted following and its own musical heroes and conventions, drum 'n' bass has never found the same level of Christian support as say house or techno. But now, thanks to the sterling efforts of two UK DJs, record producers and record label owners, that situation is quickly changing. Rubik Records began in August 2002 and since then has released a steady trickle of high quality drum 'n' bass 12 inch singles, most of them featuring the label's owners Kubiks and BCee.

Kubiks is now a significant name in the UK's drum 'n' bass underground though Christian dance enthusiasts will probably know him best for his work under his name Doug Ross, under which he's worked extensively with NGM, appeared on national TV when a 24/7 prayer team visited Ibiza and currently has a dance worship album 'The More' released by Survivor Records. BCee, known to his mum and dad as Steve Jeffrey, is a 28 year old DJ and record producer who admits to "always being fascinated by both music and technology."

Growing up in a Christian home, Steve went his own way until at the age of 20 he "turned the whole lot over to God." Already DJing, the newly converted Steve found himself being asked to DJ at youth events being organised by local churches. This in turn led to a residency at a club night. It was there that Steve first met Doug Ross. After becoming friendly, the two DJs began to talk of starting a record company. Said Steve, "At this time we were still unsure of exactly what musical style to focus on. Doug had made a couple of drum 'n' bass tracks but mainly house stuff and so we decided to put out one of his tracks, 'God Screams' on a white label. I heard a mix of 'The Vision' which had been done by the Mills Brothers from Chichester. We asked if this could go on the b-side and they were more than into the idea. We put two versions of 'The Vision' onto the vinyl, a full vocal version and an instrumental."

Steve clearly remembers what happened next. "I was driving on my way to my cell group, listening to the Vibe FM. Suddenly the music cut and in came a whispered but loud 'The vision is Jesus'. I could hardly believe my ears, 'The Vision' came on and I almost crashed the car. They were playing our record! You may not have ever heard 'The Vision' but it's not the sort of lyrics you expect to hear on the radio!"

The first drum 'n' bass release was "Life Changes"/"Sub Funktional" by Kubiks & BCee and set the tone for what was to follow on Rubik; uplifting, melodic drum 'n' bass with a decidedly warm vibe far removed from the darker sounds. Steve describes their sound as "liquid funk" which sums it up nicely. Most of the Rubik 12 inches, distributed through nu urban music, have sold well to DJs and the drum 'n' bass cognoscente. Now a potential mass audience could conceivably catch on to the company's confident take on uplifting rhythms. The CD album 'Rubik Records Presents. Kubiks & BCee' is a deft compilation which as well as gems like the duo's ricocheting "One Way Runna (Danny C Remix)" also features artists like Contour, Blue Sonix and Hold Tight.

Steve has strong views about Christian/non-Christian music debate. "I'm all out for Jesus and I'm excited at the chances God is giving us in sharing our faith with non-Christians. But when I sit down at the computer I'm not trying to make a Christian or a secular drum 'n' bass track. I'm simply trying to make the best possible music I can and a part of who I am will inevitably be heard through the music."

Thanks for interesting article , btw I am the DJ and using some acid drum packs for D & B projects.
For example like this one :

Looking to team up with other dnb artists. Check me out at djryze.com and djryze@gmail.com

Also, Bcee & Kubik!!! You rock! Where are those old "The Vision" b-sides? I spent hours looking today to no avail. Would love to hear them! Please email me!!!

Its great to here about other christian DnB artist. My label is King's Castle Entertainment, and my group is The 4th Dimension. It's been hard to figure out how my love for Jesus and my God given talent for DnB production and DJing would come together. However I have faith God's plan will come to pass in my life!

oh, and if there's anyone who wants to do service in Toronto and can put up with a devoted soul, contact me. brave.power.bornyi@gmail.com -- Just living the Gospel in the best way possible.

This is a shot in the dark because I'm think this thread is pretty much closed.

So, professed Catholic I be ... serving in truth and charity the homeless and the poorest in the poor (the unborn) in the heart of Canada's jungle city. I'm biased through my history. So, I say liquid funk's cool, I remember when Space Invaderz remix came out ... but ... if anyone cares ... the true sounds of jungle has always been when jungle and drum and bass were not one and the same ... when the Amen's were really cut up and rough. Can't see how that coincides with Christian culture, but heh, the thread's here ... so might as well put in my last penny.

All I can say is if people want to do choons like those, then go an make some conscious positive raggae (not ragga but raggae) jungle ... I'd say. There's an excellent Jewish rapper Matisyahu who brings his traditions message to youth:

http://www.youtube.com/watch?v=KxxuSiC4wNw&feature=related
And not do not forget my brother, Father Stan Fortuna of the Franciscans of the Renewal whose got this awesome influence with urban Catholic youth in NY.

There's others ... but these guys are gold.

im so glad im not alone in being an old skool junglist who has been feeling a bit lost wondering if i can 'mash up' my love of the underground with my desire to serve the lord! if anyones looking for a vocalist in brisbane please contact me, rachel at retro-spice@hotmail.com. lets keep marching !!!

Steve, thats soooo tiiight!!! Its soo awesome that you are doing this! The last line of the article was amazing and it makes perfect sense. Dude!! God bless you!

I'm in Canada and its soooo hard to find anyone who knows about dnb, the only place where I have ever actually heard them play it before is Toronto, our biggest city. I love dnb ever since I was introduced to it 2 1/2 years ago. I think its pretty friggin sweet that there are Christian dnb artisits out there!! Remember, "A man reaps what he sows."- Galatians 6:7
God bless you. Hopefully I will be able to buy your music in the future.

I love you Steve

I've got no problem with darker sounding d&b at all. This article was written about 3 years ago now when we were writing very musical uplifting stuff. We are writing all sorts of d&b these days from the uplifting musical to the heavier more dancefloor bits. You can check out my mysapce page www.myspace.com/bcee or www.myspace.com/spearheadrecords for the latest tracks.

I think it could.

I like dark drumnbass too, like Noisia etc. Oh man if there was a Christian Noisia, oh dear, I would ....that would just be fantastic.

i dunna, its hard to really draw a line on where to stop with the Christian/DnB thing, but tbh as long as you're doing it for God's glory and not your own, putting your talents and efforts into making something that'll bring people to Jesus, then I think whatever you do is right, as long as it follows what the Bible says and is made for praising God.

I've dabbled in DnB a bit, its quite fun and the drumnbass sounds just rock my ears, but i would really love to make it for a better purpose than self-satisfaction/labels/etc, so if you think thats a good idea, check out my Artist MySpace at

www.myspace.com/sashman15 I've got one dnb song on there so far, the others are Hardcore/Freeform ;D the dnb one is an eminem remix, i kinda did it out of boredom/creativity/whatever you wanna call it. I took out the bad words, because that just ....i dont like that. Tho it might sound like i didnt, but i did take out the bad words, so check it out and tell me what you think.

and of course if I should devote this music to God, if it'll work out or not.

any opinions? just message me or even write at sashman14@hotmail.com

BOH BOH BOH!
BIG UPS!
I LOVE the last statement made in this article about making the best possible music and how a part of who you are will be herd through the music!
I totally relate being an artist (visual) who loves Jesus and has him living on the inside I basically set out to just pain and Jesus shines on through no matter what!
This is such a refreshing article filled with lots of Christian dnb artists I have never her of before.
I am a HUGE dnb head and it was only today that I decided to google Christian dnb dj's and I am so looking forward to checking out the tracks and I hope to get my hands on some cd's or something!
AWESOME!
God Bless Brother and keep on running the race till were at the finish line chillin with Jesus!
PEACE
LOVE
UNITY
yours in Christ
Jewely Gee

For more on BCee visit the BCee artist profile