With DJ COOPOID (otherwise known as Andy Cooper) taking a sabbatical from the weekly dance show on Cross Rhythms radio he's presented from 1995 to 1999, it seemed an appropriate moment for the sanctified dance maestro to offer this A_Z guide. 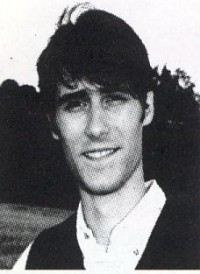 A is for AJ Mora - "Jesus Christ Is Lord!"
Inspiring hard house using preaching samples and wailing divas, from his album Transformed' on the N-Soul label, also: Abundant, The Absolute, Antidote.

B is for Scott Blackwell - "My King"
This is the tune that first showed me and many others the power of dance music when used with preaching and worship! An absolute groundbreaking classic from 1992. "He's indescribable... I wonder do you know him?" If I was told I would go totally deaf in five minutes, I would quickly play this first. Awesome, also: B.O.P., Kenny Bobien, Backroom Congregation.

C is for Cloud 2 Ground - "Melt Into Minor"
Another N-Soul release. The atmospheric introduction leads to a massive nine minute progressive house masterpiece.

D is for dba - "3-D"
Heavenly worship with infectious trancey-house feel. First appeared in 1996 on the 'Bubble' album. Remixes played on Radio 1 and in many top clubs around Europe, also: DNA Algorithm, Deep Zone.

E is for Kim English - "Supernatural"
One of the best female voices in the garage scene. This tune, remixed by Mousse T, appeared in 1997 on the Hi-Life and Nervous labels. It also appeared on a couple of high profile dance compilation CDs. also: Eclectica, Erinfall, Echoing Green.

F is for Faith Massive - "Soulstep"
Smooth and sophisticated drum 'if bass from the States. Another ground-breaker from N-Soul. This track has an uplifting worshipful feel, but could benefit from a fatter mix. also: Fractal Edge.

H is for Hydro - "The Beginning Of The End"
One of the best albums from the British scene. This track has marvellously bouncy synth lines and other ear-catching noises, and contains some ingenious poetry read by Rob Lacey. also: Hypersonic, House Of 909, House Of Faith.

I is for Ikon - "El Plastico"
This tune, from the 'Streetwise' House Our Youth 2000 compilation album, hints at a new musical direction for Ikon, with big break beats and brash bass lines, also: Instinct,

J is for Jasper St Co - "Solid Ground"
DJ Spen, a gospel garage guru, produced the album 'In A Spensane World' (on Basement Boys Records) which contains this wonderful nine and a half minute eulogy of God's saving power. A number of talented vocalists basically take it in turns to sing their testimony! also: Jumping In The House Of God, Ja'shay, Jersey Street, Joy Electric.

K is for Kings Of Tomorrow - "Set My Spirit Free"
Another uplifting garage tune, from Strictly Rhythm in 1997, featuring the breathtaking vocals of Dawn Tallman.

L is for 1:Lite - "Shelter"
Influenced by the World Wide Message Tribe and produced by the Psalmist, this group has the tunes needed to impact schools and youth groups across the country, not just their area of Biggin Hill, also: Late Late Service, Less Flesh, Limit X, Alison Limerick.

N is for Nitro Praise - "More Precious Than Silver"
Another pioneering effort from Scott Blackwell: get a well-known church chorus, add a suitable house beat, get young people worshipping! It works with this tune (though some others are just too cheesy), sung by Gina. One of N-Soul's first releases, in 1994. also: Nu Colours, Normal Generation, Ann Nesby, N-Daze.