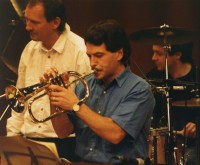 If you go to conferences you may well have seen Dave leading worship at one of the big celebrations like Spring Harvest or the Downs. If you're involved in leading worship yourself, or merely interested in the subject, you've probably read his excellent book "Worship Restored". And as a concertgoer, you may have spent an evening in the company of his mould-breaking new group, Opus. He is rightly tagged a Renaissance Man, but the renaissance he is involved in does not look back for its inspiration to the art and philosophy of the classical world. Instead Dave, and people like him, have rediscovered the Biblical mandate for artistic expression and in so doing, hope to trigger an explosion of creativity that will extend beyond the boundaries of the church, and make a real and positive contribution to 20th century culture.

We began by talking about Dave's new group, Opus. "The vision for Opus started about three years ago when I realized there were several musicians in the church whose talent really took them beyond the level of our normal worship music. Worship music is appropriate as a vehicle for worship, but in terms of artistic creativity, if you're a trained musician, it can be a bit frustrating. There were a mixture of musicians, so what I decided to do was put on a couple of experimental concerts that had a little bit of rock, a little bit of classical, a little bit of jazz, and arrangements that combined the varying skills. I had a 10-piece brass group with synthesizers and percussion, including orchestral percussion, timps and stuff, and the concerts were quite successful. Really what happened was that I found there were more and more professional musicians who were getting interested in what I was doing, especially as I was teaching on creativity around churches a bit, and developing a whole kind of vision for the Arts - of Christian Arts affecting secular culture, and providing a background for the preaching of the gospel.

"Opus has developed now into a band of 12 musicians, consisting of four-part brass, two keyboards, a violinist, a cellist, lead guitar, bass guitar, drums and a vocalist, and we play lots of different types of things."

The group features, among others, Nanette Welmans the BBC jazz singer of the year in 1987, on vocals. The cellist in the band as well as playing in the Opus string trio, is an avant-garde composer in her own right. "She would never get an outlet in the Christian world," Dave explains, "but in an Opus concert she plays stuff she's written for solo cello."

The keyboard player, Poppy Hyde, is a concert pianist who has adapted her style to play classical music on synthesizers, while Raoul d'Olivera on trumpet is a top session man in the world of pop and jazz. The possibilities of such a line-up seem limitless. The original concept was to do radical rearrangements of classical pieces, featuring the whole group. Shows have also featured Nanette Welmans singing her own songs, using the rhythm section of the group - one of the great advantages of the line-up is its flexibility, the way it can subdivide into self-sufficient units. The vision of the band has now evolved well beyond rearranging existing pieces.

"One of the ways the band is developing is that there is a sound which is becoming the Opus sound. So what we're tending to do is work on original stuff - we are writing specifically for the band, so its drawing on all our different areas of skill and background, but trying to create a music that is identifiable as Opus music."

As one would expect, Dave's motivation for being involved with Opus extends beyond a mere desire for self-expression. "The thing about Opus that is really buzzing with me is much more to do with my theology of the Kingdom of God - while I believe there is no substitute for the preached word of the gospel, nevertheless we do have an influence on our culture as Christians by being salt and light. If Christians can get into the world of the Arts, and bring godliness and integrity to it, because the Arts affect our culture, and our culture affects what people think and feel, then what we can do is provide a climate for the preaching of the gospel. God is the creator, and true creativity is an expression of godliness. Christian art doesn't need to be utilitarian; it can be art for art's sake. If you're coming from a Christian world-view, you will communicate your spirit."

Plans for recording with Opus are in their early stages - but Dave has definite ideas about the direction the group should take. "We don't want to go with a Christian record company - we only want to do it if it's with a secular company on a commercial basis. What we're not trying to do is to be a Christian band playing Christian music - we're not doing a Heartbeat or a Graham Kendrick. We're just trying to break into the secular world as a group of musicians playing music."

Dave met record producer Alan Shacklock at a Christian music conference in 1988, and they've both expressed a desire to work together, schedules permitting. In any case, 1990 could be year that the Opus sound is captured on tape.

Dave has been at the forefront of the move to restore Worship to its rightful place in the life of the church, both as a worship leader and as a writer of spiritual songs. I asked him which of the choruses he has written had met with the greatest response from the church worldwide.

"The one that has been most used worldwide must be 'God Of Glory' - I think that's probably my biggest song. I don't think it's my best, but it's certainly the most popular. It was written in 1983, but it was sung at the recent Billy Graham events in London, it was featured quite a bit at Earl's Court. I've noticed it's often on 'Songs of Praise' - it would be the song that identifies me as a songwriter on a very broad perspective."

How did the writing of the song come about? 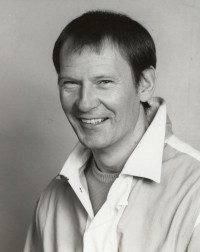 "It was no great inspiration really - it was a feeling that I wanted to write a song that expressed something about the character of God - something to bring people into objective praise. I think so many choruses or spiritual songs are experience-orientated. There don't seem to be choruses written with the same content of things like 'Praise To The Lord, The Almighty, The King Of Creation', or immortal, Invisible, God Only Wise'. For many charismatics those songs are a bit anachronistic in their music, but we still need to be saying the same kind of things that those songs are saying. So 'God Of Glory' came out of that desire really - out of a decision to write a song about the character of God and something that expressed praise to Him - so I just put it together."

So is the work of the spiritual songwriter often 10 percent inspiration, 90 percent perspiration? "Oh, absolutely. But something like' At Your Feet We Fall', I was just reading Revelation chapter one and wrote the whole song in one go, without even planning to do it, it just came."

Hi David, just come across this webpage and thought I would contact you after all the years since Guildford Citadel. How are you these days, we are retired as you may know but still keep active. I would love to make contact with you sometime. God Bless you.
John. johnhatcliffe@hotmail.co.uk