David/Asaph Project: One man's journey to put music to the Psalms 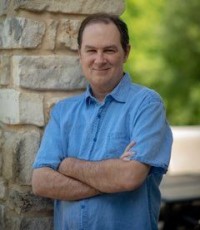 When American doctor David Albracht first endeavoured to put his original music to the Psalms, he could have had little idea that one day his endeavours would lead him to the world famous Abbey Road Studios, where the renowned choir London Voices and the London Symphony Orchestra gathered to record his original music to three of the Psalms. David came to the Cross Rhythms studio to tell his extraordinary story.

David was born in Amarillo, Texas. He laughingly admits, "I grew up in a chiropractic family. My father is a retired chiropractor, his father was a chiropractor, and all of his brothers were chiropractors. I am the eldest of seven brothers and I followed in the footsteps of health care but I took a little bit of a different pathway. I went to medical school and now I work as a general medicine physician. Four of my brothers are also physicians in various specialties. Around 1970, my parents decided to leave the Catholic Church, which was a big deal. When I was around six or seven, I began attending a charismatic non-denominational church with my parents and the rest of my family."

David continued, "I grew up hearing my mother play the piano. When I was in 4th grade I heard the Amarillo Symphony Orchestra play for our elementary school. I was so intrigued by what I heard, I said I want to play one of those instruments. I chose the violin that year. In the education system we had, they had a violin-teaching programme and I stuck with the violin for a number of years all the way through high school. At 15 or 16 I acquired a guitar and began learning some chords, and that's pretty much it. I had focused on the guitar for a number of years and then in college I dropped it for a while because I was so focused on other things, particularly preparing for medicine. While in medical school I acquired the guitar and that is when the melodies of the Psalms started arriving."

His move into becoming a Psalmist is vividly remembered. "Towards the latter part of 1988, I was in my apartment one afternoon and then suddenly music began arriving. I'd sat down with the guitar, which I hadn't played in a number of years, I had my Bible open to the text of the Psalms and there was a portion of Psalm 46, which stood out, that said 'Be still and know that I am God.' I had recalled music in the church of my youth, in which the Psalms were sung, word for word, and I thought I wonder if it's possible that other songs could be placed to the text of the Psalms? A melody came forth and I was surprised because this was the first melody I had composed and then subsequently others began forming, so much so that I didn't understand why this was happening, or what it meant. And eventually I decided to put together a project to record some of these melodies. I decided to name it the David/Asaph Project mainly because King David and Asaph were the two most prolific writers of the Psalms, with Asaph writing eight or nine. So that was the name of the project and it has been going since then. I worked [for] many years trying to put together music to the Psalms and continue to this day."

In 2000, David approached a producer/guitar player, John Piper, who was working at 2nd Floor Studios in Dallas. Piper hired some of the best musicians in the Dallas area. The resulting album, 'Psalmody' by The David/Asaph Project, featured David Albracht's vocals on 12 Psalms (namely Psalms 94, 123, 111, 3, 93, 108, 1, 66 [verses 1-4], 11, 29, 126 and 133). The money to record and manufacture the CD came from David's savings, with support from family and friends. Having made the recording, David had to face a tough question for every independent artist - who's going to listen to this? Commented Albracht, "What was so surprising to me is that when we started getting the music out there, people really identified with the music; they appreciated the style of music, and what the performances were. Plus it was different. This was the text of the Psalms set to music in a contemporary type of setting. The response of listeners has been a joy to hear."

It was to be many years before another David/Asaph Project emerged. David experienced some health issues, requiring major surgery, and by the time, in 2007, he was ready to begin working on a new album, the music industry was radically changing. John Piper and his wife had relocated to Louisiana, and the internet had become the major vehicle for disseminating music around the globe. David responded to the challenge. He commented, "We had to figure out if we're going to record another album how to deal with the distance. That was about the time when the internet really started coming online. We actually used Dropbox to record 'Pastoral Psalms'. We released it in 2014, and there were 10 of the Psalms in 14 tracks. We did it differently that time, in the sense that the instrumentation was exclusively acoustic. This was something we had conceived early on and worked on it very extensively for that. The next year we recorded the choir track Psalm 23 in London. It was recorded by the Collegium Musicum with the London Chamber Choir. I went ahead and remastered 'Pastoral Psalms', added the choral version of Psalm 23 and re-released the album in 2016."

The collaboration with Paul Ayres on Psalm 23 showed just how well some of David's Psalms came out when sung by a top quality choir. An idea began to form in Albracht's head that for his next venture he would grab the bull by the horns and endeavour to get three of his best works, Psalm 66, verses 1-4; Psalm 48; and Psalm 115, and record them in possibly the best studio in the world with a top choir and top symphonians. And so the making of 'Make A Joyful Noise!' with London Voices and the London Symphony Orchestra began to take shape.

Explained David, "Psalm 66 verses one to four was originally on the 'Psalmody' album, but with Paul Ayres' choir and orchestra arrangement, it took on a new lease of life. The other two Psalms, Psalm 48 'Great Is The Lord' and Psalm 115 'Not Unto Us, O Lord', are melodies that I'd had in my mind for a long time and hadn't recorded them for other projects yet. So this is gonna be the introduction of those two Psalms."

Getting the LSO to record three of his Psalms (which have been released on 'Make A Joyful Noise!' in vocal and instrumental versions) wasn't an easy task. Said David, "It was a logistical challenge to say the least, but we'd been working on getting that together probably for a year or so. What surprised me was when I approached the different orchestras, we had some very nice responses from several, and one of them happened to be the London Symphony, and it just kind of developed from there."

Clearly David Albracht's David/Asaph Project has already achieved far, far more than its creative helmsman could possibly have imagined when in 1988 he first heard a melody stirring in his heart for Psalm 46. Talking to this musical visionary, one feels there is still much more to come.

Tony,
I want to thank you for the wonderful article you wrote concerning David and his music!! You did a great job as it was well written and truly helps one understand the journey he has enjoyed. Obviously, I am partial as I love my brother, but it is a joy to see someone else express what we feel when seeing David make it to this point in his life with his music. God has truly blessed him with something special and I believe He has directed Davidâs steps along the way. I am glad the two of you have met in the process. Again, thank you for the article and for what you do so well!!
Sincerely,
Dr Bryan Albracht